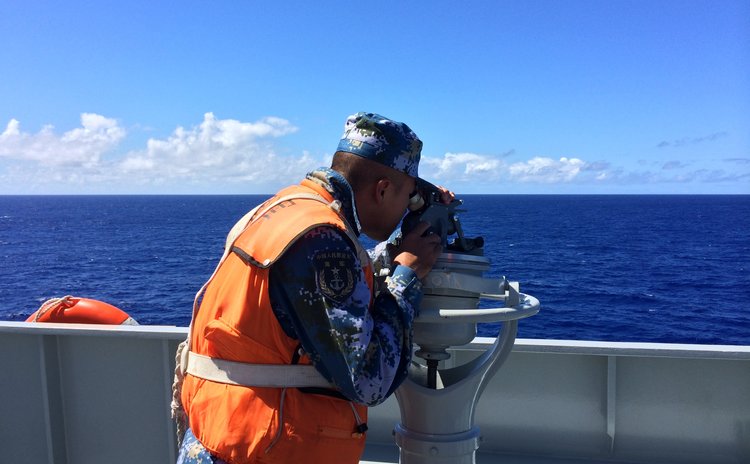 ABOARD JINGGANGSHAN, April 13, 2014 (Xinhua) -- A sailor aboard Chinese navy's amphibious landing vessel Jinggangshan scans the ocean in search for the missing Malaysia Airlines.

They also said the task would be difficult since the submarine will have to operate at its depth limit of 4,500 meters and countries involved in the search would consult later this week to discuss future operations since value of the visual search by aircraft and ships is "diminishing".

According to U.S. Navy Captain Mark Matthews, the Bluefin-21 was scheduled for its first underwater mission at 5 p.m. local time (0900 GMT).

But no confirmation of its deployment is available now since equipment delay is very common due to technical reasons.

Matthews said the Bluefin-21 underwater vehicle works in a 24- hour cycle, with two hours going down, 16 hours of searching underwater, two hours coming up to the surface and four hours for data downloading, analysis and re-programming.

"Once it is deployed, it will operate 35-50 meters above the sea bed and is able to look 300-400 meters each side of its track, which should provide us a very detailed map of the ocean floor which will be analyzed by experts on the (Australian navy ship) Ocean Shield, " Australian Navy Commodore Peter Leavy told Xinhua.

Chief Coordinator of the multinational search operation Angus Houston has disclosed potential thick silt is expected on the ocean floor where the Bluefin-21 would work, which may cause barriers for the vehicle to scan for possible debris.

"Depends on how thick it is, the site scan sonar of Bluefin-21 is able to penetrate the silt, from no penetration at all to 4-5 meters, but we really don't know the silt until the sonar gets down there, so there's a lot to be discovered from the first mission," said Leavy.

At his morning press conferences on Monday, Houston said no pings had been detected since last Tuesday and it was time for the next step in the search.

Houston said the failure to detect further signals may indicate that the batteries of the aircraft black boxes may have died 38 days after MH370 mysteriously disappeared.

"It's time to go underwater," Houston said, stressing that the following process would be "slow and painstaking."

The Bluefin-21 underwater vehicle will initially cover an area of 40 square km. Using its sonar equipment, the mini-sub will send back a high-resolution 3D map of the ocean floor for analysts to sort out possible debris of the missing plane.

Houston told reporters at another press conference which was only open to the Chinese media that Bluefin-21 is the only submarine currently available to Australia, but any other underwater vehicles that can go into the deep ocean would probably be useful in the future, provided they have the right equipment to search the ocean bottom.

"It's a long process because we never had a search conducted in such deep water before, the AirFrance disaster was conducted in a water of 3,000 meters deep, this time we are looking in a water which is 4,500 meters deep, we are dealing with very high pressures and potentially very difficult conditions," said the search leader.

When answering question by Xinhua whether the current searching focus had been adjusted to underwater mission instead of surface work, Houston said the value of the visual search by aircraft and ships is diminishing "because now it's the day 38 since the aircraft had lost and we have had no item recovered or identified from the sea which had anything to do with the MH370".

He also stressed that Australia had a very good cooperation with other countries which were involved in the mission and all the countries that contributed their assets are all still operating their ships and aircraft in support of the search activities and no body has left the search.

Referring to whether those countries would decrease their resources thrown to the mission for surface search, Houston said "they will get together and consult what needs to be done" and he believed that would take place later this week.

The MH370 disappeared en route from Kuala Lumpur to Beijing on March 8 and all traces indicated the plane had ended in the southern Indian Ocean.

Since then more than 10 countries have joined a multinational search operation led by Australia and the Ocean Shield detected four suspicious signals in its mission area during the past week.

Australian Prime Minister Tony Abbott said during his visit to China that he was "very confident" the black box of the missing aircraft was just "several kilometers" away in a narrowed grid of 40 km by 50 km.