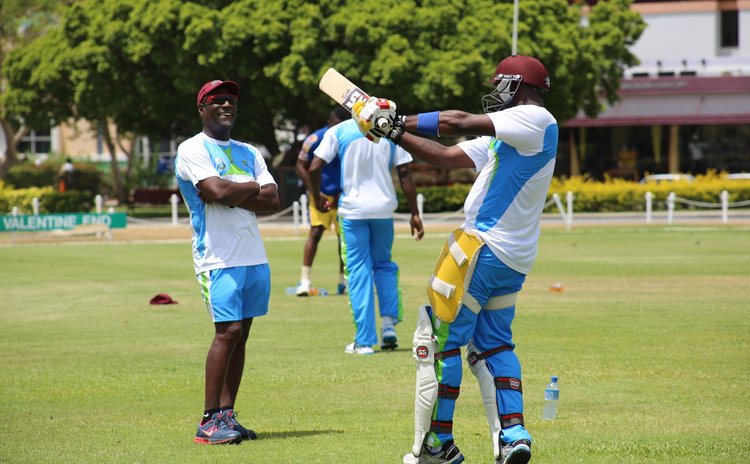 CAVE HILL, Barbados – Head coach of the Sagicor West Indies High Performance Centre team Graeme West said the presence of Sir Vivian Richards in the training camp ahead of their series against Bangladesh-A is a welcomed boost for the side's preparations.

Sir Viv will work with the coaching team at the Sagicor WIHPC that is headed by West to prepare the 13-member squad for their series of two four-day, three 50 overs-a-side and two Twenty20 matches – all to be played in Barbados from May 26 to June 15.

"To work alongside someone like Sir Viv is a privilege and his presence offers a number of things to the players as we prepare for the upcoming matches," said West.

"First, the players can see the importance of this camp when someone of the calibre of Sir Viv is standing there and observing them, talking to them, offering some mentoring to them. The value that brings to the programme, you cannot put a price on it."

Sir Viv is the latest former West Indies player currently either involved with coaching or advising a number of West Indies teams.

West said: "Also, when you look at the experiences that he had and the teams in which he played, he helped to create a culture of winning – and this is one of things we want him to emphasise during our sessions with the players – how to create and maintain a winning habit.

The two-week camp formally opened on Tuesday and West said that Sir Viv had already begun to make his presence felt with the players.

"In the few sessions he has had so far, you can still see that hunger, that passion, that desire for West Indies to be successful still burns within him," said West.

"He can also add value with the batsmen in terms of little technical and tactical approaches that can help them, but he is also very keen on helping them to build confidence and self-belief. It's a great opportunity for all of us and it raises the bar in terms of what we are able to offer."

West said the aim of the camp and the brief series against the Bangladeshis was to help emerging and fringe players to sharpen their skills and turn the heat up on the players in the senior West Indies squad which will soon begin a home series against New Zealand.

"We have looked at a lot of the performances of the players from the regional tournaments and there were a number of successful performances and some of those players have been chosen for this squad," said West.

"We are starting to look through the footage and the statistics that have come through to try and make the guys aware of the areas in which they need to improve. All of the batsmen, if they could average another five or six runs an innings, could make a difference to their numbers."

He said: "The players will be challenging for places on the senior team, so we need these guys to have an awareness of what they need to work on.

"They have the best part of two weeks to do this and try to enter the four-day matches against Bangladesh with the players really, really clear about how they will become better players."

"We have players that are more experienced," he said. "The first three groups had huge potential, but they did not play enough to have the understanding of how to play in certain situations. These players have far more experience and have played 40 or 50 first-class games. It's about looking and refining little things to give them the ability to move their games forward." (WICB)