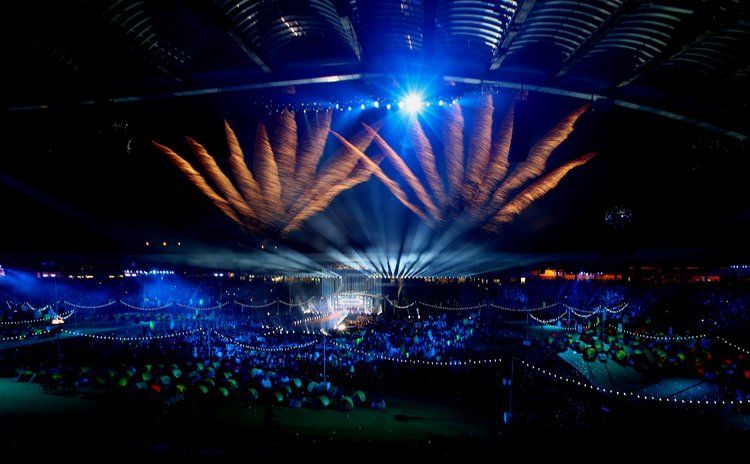 After 11 days of competition in 17 sports across 13 venues, a spectacular fireworks display lit up the city's skyline to signal the end of the Glasgow 2014 Commonwealth Games.

After a speech by Commonwealth Games Federation president Prince Imran there was a rendition of Robert Burns' Ae Fond Kiss by Karen Matheson as the Commonwealth flag was lowered and carried through the throng of athletes on the pitch to be passed on the the Gold Coast where the Games will be held in 2018.

The dazzling show and fun-filled night was the perfect swansong to a fantastic fortnight, one in which the city of Glasgow, the athletes and the entire Games fraternity flourished in a warm embrace of Commonwealth unity and friendship.

More than 4800 elite athletes competed for 261 gold medals in exhilarating displays of speed, strength, skill and stamina from swimming to squash, and from weightlifing to wrestling as para sports were integrated into the Games for the first time.

Even the notorious Scottish weather played its part by providing roasting sunshine, at least until the last couple of days when it reverted to type.

The smiles of athletes, officials and fans alike were as wide as the city's famous River Clyde after which the Games mascot was named.

None grinned as much as the thousands of volunteers, without whom the Games would not have been possible.

The clyde-siders, as they were known, came from all over the UK to be part of the fantastic festival of sport and immersed themselves in their roles.

As spectators streamed into the SECC concourse one day, a dozen clyde-siders held up their large green pointing hands to offer children - and adults of all ages - the chance to run the line, giving a high five to each one of the squealing and excited children and grown-ups.

Glaswegians love a party and they launched themselves into the proceedings with their humour, friendliness and famed 'gallus' attitude that elicited an enormous outpouring of gratitude from athletes and visitors to the city to underline the slogan that People Make Glasgow.

The Games were a huge success for the city, and for those 11 delightful days the Commonwealth belonged to Glasgow (CommonwealthGames Website)