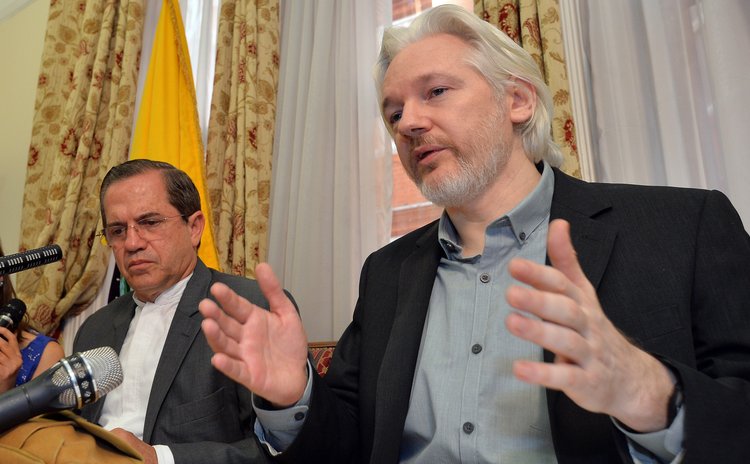 LONDON, Aug. 18 (Xinhua/Sun) -- WikiLeaks founder Julian Assange said on Monday that he would be leaving the Ecuadorian Embassy in London soon, where he had taken refuge for two years.

"I am leaving the embassy soon ... but perhaps not for the reasons that Murdoch press and Sky news are saying at the moment," he told a specially convened group of reporters about his political asylum and legal battle for freedom.

"The British Parliament and the British legal community have seen the abuses of my rights and other Britons who have been extradited without charges," Assange said.

"Now an understanding has developed within the United Kingdom that the position that was taken by Ecuador is the correct one," he added.

The 43-year-old Australian had been granted political asylum by Ecuador, but was unable to leave the embassy due to an arrest warrant issued by a Swedish court for his alleged role in two sexual assault cases. He dismissed the charges as "politically motivated."

"I have not been charged with an offense here in the United Kingdom or in Sweden at any time," he told the press conference.

Assange also slammed the "unprofessional" media reports that alleged two women he met during a visit to Sweden in 2010 had accused him of sexual offenses.

"It is often falsely reported that women in Sweden have accused me of the serious crime of rape. That is false. No woman has done so. In fact the women in Sweden explicitly denied having done that," he said, stressing that there has been "very significant" misreporting on his case.

At the press conference, Ecuadorian Foreign Minister Ricardo Patino said Ecuador would negotiate a "friendly and diplomatic solution" with the British government to protect Assange's human rights and prevent him from being extradited to other countries.

Patino said that Britain was undertaking legal reforms that could increase the possibility of striking a diplomatic deal between his country and Britain to solve the political impasse over Assange.

"With these reforms, the current legal framework in this country in principle would prevent the extradition of people who have not been formally charged by the judge and this is of course the case of Julian Assange," Patino said via an interpreter, adding that Ecuador was working with the British side to prepare legal arrangement for the deal.

The foreign minister also affirmed the validity of the asylum given to Assange two years ago, renewing Ecuador's commitment to the protection of the whistleblower's human rights, freedom and life.

Encouraged by the legal changes, Assange expressed his gratitude to those in Ecuador and Britain who have fought for his rights and freedom.

"Ecuador, together with the support of a number of Latin American states and human rights groups here in the United Kingdom, has protected my rights while this changing law has occurred," the embattled Australian noted.

"I am thankful that the United Kingdom is standing up for its long-held values of due process, that there must be formal charges against a person," he commended.

Assange has infuriated several governments, including the U.S. authorities, by disclosing hundreds of thousands of secret files concerning Iraq, Afghanistan and diplomatic cables from U.S. embassies around the world.

In June, 2012, Assange fled to the Ecuadorian Embassy in London and was granted political asylum by Ecuador two months later.