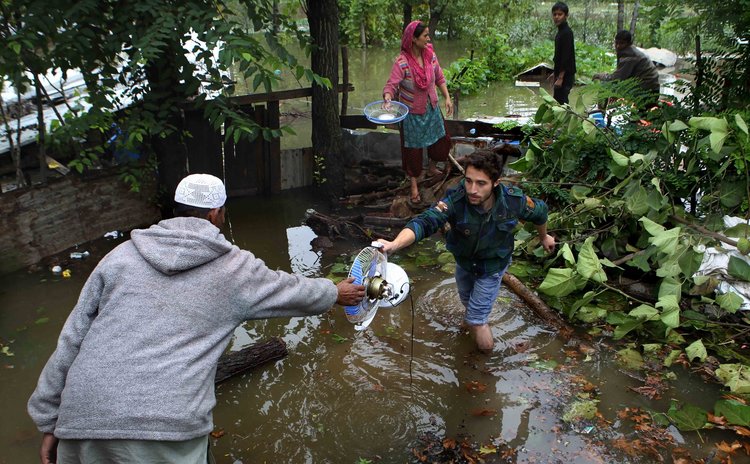 NEW DELHI, Sept. 6 (Xinhua/Sun) -- At least 160 people have been killed and tens of thousands threatened in what the authorities described as the worst flood in 60 years in Indian-controlled Kashmir, according to government officials Saturday

Some 2,500 villages have been partially or completely submerged across the area, while thousands were staying on the roof of their houses waiting for rescue by the government.

Indian Home Minister Rajnath Singh has assured help to deal with the grim situation and promised to start sending army helicopters to air lift people marooned in the deluge.

He said 160 people had lost their lives in these floods whose magnitude was unprecedented in 60 years.

"If there is so much devastation in the city, I wonder what would be the situation like in rural areas," said Singh in Jammu city.

"I want to assure the people and the government of Jammu and Kashmir that the central government stands besides you in your hour of crisis and we extend all necessary help to you," he said.

The opposition Congress has slammed the BJP government for slow reaction to the crisis and called for the declaration of national calamity.

Leader of opposition in the Rajya Sabha Ghulam Nabi Azad, a former chief minister of Indian-controlled Kashmir, spoke to Prime Minister Narendra Modi on phone and demanded immediate steps so that the stranded people are shifted to safer places more efficiently and effectively. The prime minister assured all possible help to the Kashmiri people in this hour of crisis.

Extensive and large-scale damage of unprecedented proportions has occurred to public infrastructure like roads, bridges, drinking water systems, power distribution systems and private properties like houses, shops, vehicles and livestock due to the floods, according to media reports.

Over 50 bridges, hundreds of kilometers of roads and power installations units were also damaged and a final assessment could be made only after the flood waters receded, said officials.

Communication with one Xinhua reporter based in Srinagar has been lost for two days while a Xinhua photographer said he has lost touch with his family.

"We are helpless. The government does not have enough man power and rescue equipment like boats to help people," said the photographer on condition of anonymity.

"I talked to my aunt and she said she was staying at the second floor of her house while the first floor was completely in water," he added