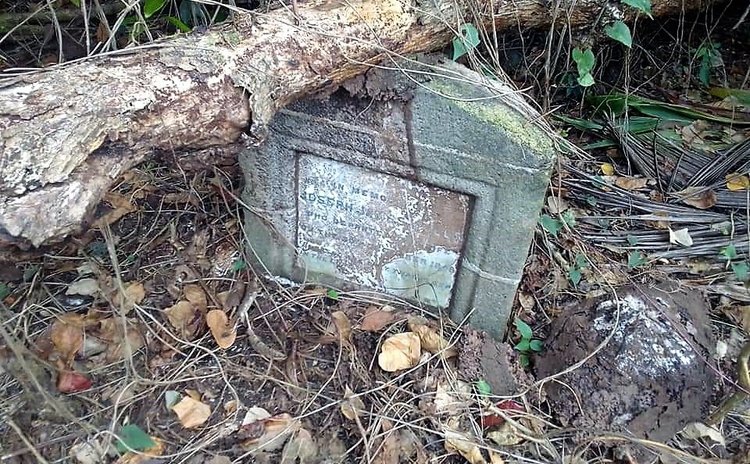 A historic grave in the Wesley community is the latest discovery of local historian Dr. Lennox Honychurch.

Dr. Honychurch whose services the government of Dominica has engaged to assist with preserving artifacts and traditions at the site earmarked for construction of an international airport announced that the large gravestone which was heavily covered in the secondary forest was that of the former owner of the Eden Estate, Joseph James Wells.

"It is the resting place of a former owner of the plantation, Joseph James Wells. The gravestone reads that he died on 30th December 1848 with added words " Blessed are those who rest in the Lord."

He was a member of the Wells family of Antigua," Dr. Honychurch said in a social media post.

Dr. Honychurch further disclosed, the historic gravestone of cut volcanic stone, marble, and lead, was uncovered when it was found on the entrance road in an area being cleared for parking of equipment for construction of the international airport.

Speaking to The Sun, Dr. Honychurch said since the grave was not within the airport's perimeter it will not be destroyed or moved but three other more recent tombs found elsewhere on the airport site will be moved.

"The other burials are modern burials of Wesley villagers who died within the last 10 years but they are within the airport zone so they will have to be moved. But the gravestone is not on airport land that's on private land, the Armour's," he said, adding, "it's not in the way of anything and it's on private property so there is no reason for it to be moved or destroyed."

Dr. Honychurch said no other artifacts have been discovered thus far but the historian is hopeful that once excavation work begins on the land proposed for the international airport some discoveries will be made.