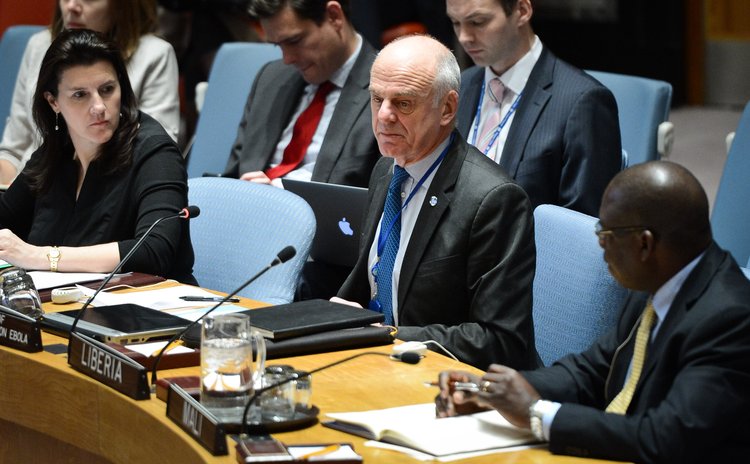 UNITED NATIONS, Nov. 21 (Xinhua) -- UN officials on Ebola on Friday highlighted the need for the international community to sustain efforts and start to focus on recovery in the global fight against the killer disease.

The Security Council met and heard a briefing by David Nabarro, the Secretary-General's Special Envoy on Ebola, and Anthony Banbury, Special Representative and Head of the UN Mission for Ebola Emergency Response (UNMEER).

"The outbreak and the threat it poses to region and to the world will not be over until the last case is identified, isolated and under treatment, " said Nabarro.

While underlining that Ebola is not just an urgent public health crisis, Nabarro stressed "it's a complex emergency. Ebola and the fear and stigma it creates has affected health provisions, education, food security, trade and economic well-being."

The primary credit for progress in the fight against Ebola goes to the communities that have made difficult decisions to abandon generations of traditional practices, said Nabarro, warning that "if we take our eye off the ball, case numbers will climb again."

"We must remain vigilant and persevere with a flexible and well- adapted response," he said. "The focus on recovery should be happening now."

The envoy also stressed as the affected nations work to maintain essential services and hasten revival, it is necessary to promote greater resilience through improved health services and other essential infrastructure so they can recover stronger.

Nabarro also estimated that the UN system will need about 1.5 billion U.S. dollars through to March 2015 in order to end the outbreak. "Much has been committed, but there is a shortfall of over $600 million," he said.

Speaking from Accra, Ghana, via video link, Banbury told Council members, "We must work hard, we must work fast, we must work smart and work until the disease is finished."

"The latest WHO numbers show that for known cases, we are achieving 55 percent of case isolation and 87 percent of case burials. Those are very significant achievements compare to where we were when the Council last met on this subject," Banbury said. "However," he warned, "we are far -- far- away from ending this crisis."

Friday's meeting follows last week's briefing by Banbury and Nabarro to the General Assembly in which they described evolving characteristics of the epidemic and progress in scaling up the international response.

Earlier in the day, the World Health Organization (WHO) released its latest report on Ebola cases dated Nov. 18, which put the number of confirmed cases of Ebola at 15,351 in Guinea, Liberia, Mali, Sierra Leone, Spain, and the United States and in the previously affected countries of Nigeria and Senegal, with 5, 459 reported deaths.