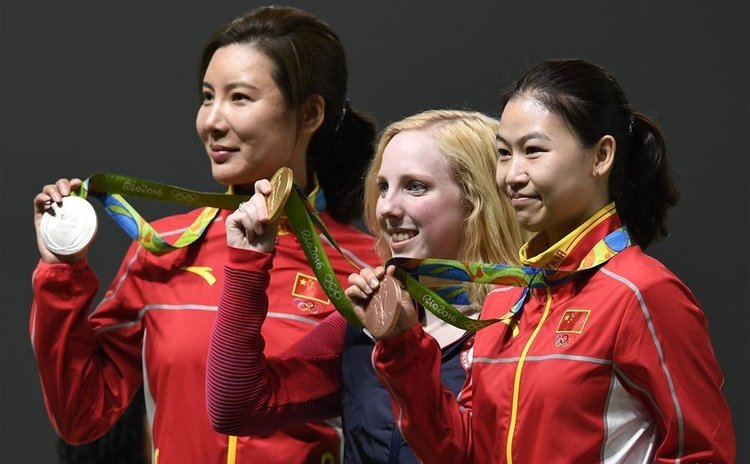 Virginia Thrasher (C) of the United States, Du Li (L) and Yi Siling of China attend the awarding ceremony of the Women's 10m Air Rifle of shooting of the 2016 Rio Olympic Games

Du Li and Yi Siling, both from China, took home the silver and bronze medal respectively.

Du finished with one point behind Thrasher, while Yi ended the event with 185.4 points.

Yi, who edged into the final with the eighth place in the qualification stage, took the lead with 63.1 points after the first six shots. Thrasher moved ahead after the seventh and eighth shot. Daria Vdovina from Russia hit straight good shots to climb to the top after 10 shots, but the 9.2 in the 13th shot pulled her down to end up the match at the fifth place.

It was an intense match for Thrasher, Du and Yi for the medal contention. Du kept trying to narrow the gap, but Thrasher made all her last four shots above 10.4 to claim the title.

The historical record was quite simple for the U.S. teenager who picked up shooting at the age of 15. Her best record on international stage before the Rio Olympics is the fourth place at the ISSF World Cup in Munich earlier this year.

"It's just an intensive feeling of pride for my country and I'm so happy to be here," said Thrasher after the victory ceremony.

"I was just trying to shoot the best I could for my first Olympics experience coming without any medal. The first gold medal for Rio 2016, for USA at 19 years old is incredible."

It was the fourth Olympics for 34-year-old veteran Du, who won the title at the same event 12 years ago in Athens, Greece.

"It's really hard," said the silver medalist, "There were some expectations, but It's just too hard."

It was the third Olympic medal for Du, and she said she was still nervous during the competition.

"I couldn't stop myself from looking at the standings time and again," she added.

Defending champion Yi brought home the bronze medal. She collected as many as 10 ISSF World Cup medals and one silver at the 2014 World Championships, but failed to become the first shooter in the Olympic history to win multiple gold medals in women's 10m air rifle.

"So much pressure for me," said Yi. "I have been thinking about today's match for the last couple of days, and I tried really hard to shoot my best."