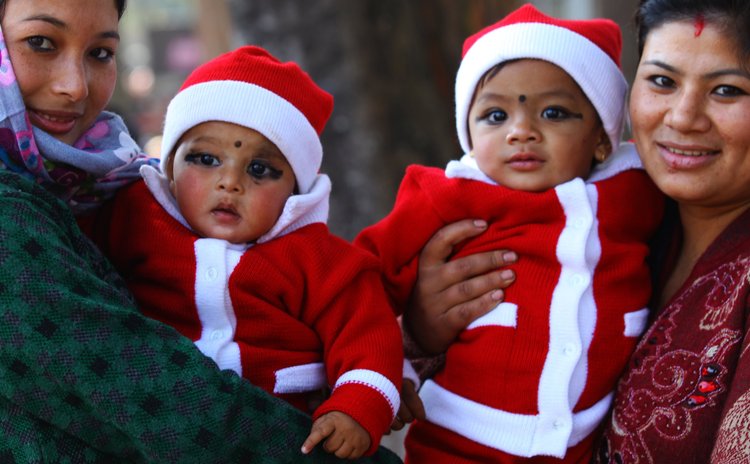 LALITPUR, Dec. 25, 2014 (Xinhua) -- Nepalese children are seen with their mothers during the celebration of Christmas at Jawalakhel in Lalitpur, Nepal, Dec. 25, 2014. (Xinhua/Sunil Sharma)

BETHLEHEM, Palestine, Dec. 24 (Xinhua/Sun) -- The streets of Bethlehem, the holy city of Jesus Christ, was fully ornamented on Wednesday night with lightened trees and little colorful models for Christmas celebrations and Midnight Mass at the Church of Nativity.

Fu'ad Tawal, the Great Patriarch of the Latin Church in Jerusalem and the Holy Lands arrived at the Church of Nativity earlier at night for the Midnight Christmas Mass and to announce the beginning of Christmas celebrations.

Several Palestinian unity government ministers as well as the governor of Bethlehem and heads of the Palestinian security apparatuses received Patriarch Tawal, who headed directly to the Church of Nativity and started prayers before midnight.

"We tell all our Christian brothers in Christmas Happy New Year and Merry Christmas. We pray to God that by next year, peace will prevail in our beloved country," said Abbas during the dinner ceremony with Patriarch Tawal and other senior officials.

Abbas expressed deep sorrow for what happened to the Christians in Iraq, and said that the political situation was very difficult during 2014 and expressed his hope that next year will be better.

"Next year we are in a bad need for starting the process of reconstruction in the Gaza Strip after the huge destruction that struck the territory during the last Israeli war. We are also in need for real reconciliation whatever the circumstances are," said Abbas.

He also said the Palestinians "are also seeking peace with our Israeli neighbors," adding "What we want is to implement the resolutions and give us our lands they occupied in 1967 to establish our state with Jerusalem as its capital."

Meanwhile, Jibrin Bakri, the governor of Bethlehem, told Xinhua that the security situation in the city is completely under control and stable after all measures were taken to enable the people to celebrate Christmas," referring that 500 policemen deployed in the city to ensure security.

Christmas celebrations kicked off in the city where scouts played on their drums and marched the streets of the old city. Folks of tens of thousands of pilgrims, tourists, international visitors and Palestinians arrived to the celebration.

Lina, a young Palestinian girl, told Xinhua that she is extremely happy to celebrate Christmas in Bethlehem this year, adding, "I hope that next year, peace will dominate in the Palestinian territories."

Nivine Yousef, a Muslim girl, told Xinhua "We both Muslims and Christians in the city live as brothers and sisters regardless what religion is. The most important thing is to celebrate and see all those pilgrims coming here."