In rare incident a man returns a purse containing $2000 that he found in Roseau to a villager on the west coast. 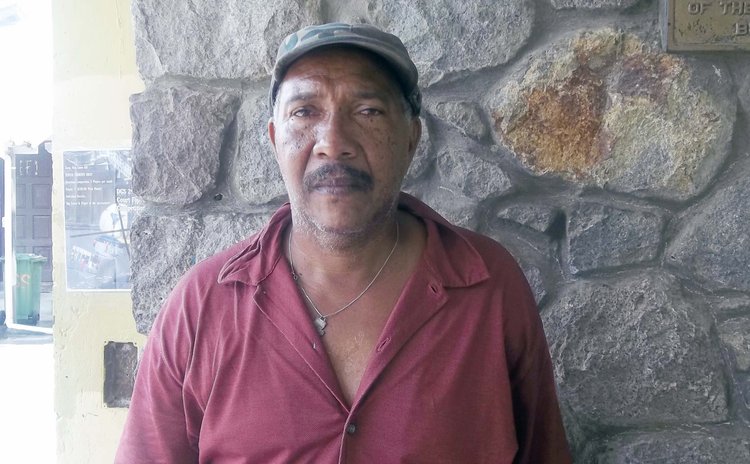 In this world where we are constantly bombarded with negative incidents in the news, it was like a breath of fresh air when The Sun learned about a real life Good Samaritan. Albert Lockhart, an angel some may call him, found a purse containing a large sum of money and returned it to the owner.

According to Lockhart, on February 27, 2015 "I was going to pay my bills at DOWASCO and on arriving there I saw something on the road so I approached it. It was already semi-opened and it was upside down and when I watched it had a lot of money in it. I took it and fold it up and I went to pay my bill. Afterwards I watch to see if it had an ID; I didn't check the money. I found an ID in it and I saw it was a Dominica Association of Teachers (DAT) ID so I went to DAT to see if I can get an address or a telephone number to tell the person that I got the money but they told me that the person is no longer a teacher and they don't have a number."

He said that after this first road block he then went into the purse again with the hope of getting a contact number or any address and fortunately he did. Lockhart said he travelled to the person's home past Mahaut to hand deliver the purse with all the money.

"So I go and look into the purse again then I found a social security card and some ID saying that the person living in the country side. I went to the bus stop, I spoke to a bus driver9and asked) if he knows these people. I didn't tell him what transpired. He told me yes, he knows the people. When I went there the lady wasn't there but her husband was there. I told him my name and what happened, He called the wife to inform her that someone just brought the purse for her," said Lockhart.

Lockhart added: "I want to tell people be honest with yourself and you will get the reward because the reward doesn't happen today for today, maybe two years down the line you will benefit from something good because it wasn't never my intention to hold the money. I didn't check the money but when the man called his wife she told him that it had about $1600."

When the Sun contacted the woman, who asked the newspaper to withhold her name and address, she said: "I felt extremely blessed because very few people would receive a purse with that large sum of money and return it. I was grateful and that person is an angel. I salute him highly for what he did for me."

She added: "I came from First Caribbean Bank to withdraw money to pay my workers, then from there I went to DOMLEC to pay my bill then proceeded to DOWASCO on my way close to the roundabout I stopped a friend and I got a ride to DOWASCO.

"At DOWASCO I then realized I no longer had my purse, I then called the person who gave me a ride and there was no answer but I thought if she saw she would have called back because I was sitting next to her in the vehicle. I then went to back to DOMLEC to see if the purse was there but I was told no, I then proceeded to the roundabout where I got the ride to hoping that I maybe fell there but it wasn't there either".

She then sat on the wall near Fort Young Hotel holding her phone in her hand praying that someone would call to inform her that they found the purse. Apparently her prayers were answered because while she was still in Roseau her husband called her to inform her that a man returned her purse. She hadn't informed her husband that the purse was missing hoping that someone would call her before she gave him the news. When she asked him how much money that was there he said $1600.

She explained that in fact that as one would open the purse one would immediately obtain $1620, and then in another compartment had $300, then US $20 she had just received from a relative and then £ $95.

Meanwhile, Police Public Relations Officer Inspector Claude Weeks stated that this incident is "very rare" noting that the average person wouldn't have returned the purse to the owner and for this Lockhart has earned the title of a Good Samaritan.

"From the police perspective, I have to be brutally honest this is rare. Most times people find things particularly money in wallets and other areas you will not find the money, or some money will be missing, but to take all of the money and bring it to the owner? This is a tremendous feat. That is definitely a reflection of a kind heart, a reflection of a Good Samaritan. He is an ordinary citizen and it tells you, whether ordinary or high profile citizen, it talks about credibility and honesty in the heart," he stated.

"It is really great civic duty by a citizen of the Commonwealth of Dominica to have found a purse containing about $2000 and to return this purse and its contents to the owner untouched, nothing had been stolen from it or shared neither did he hold the owner at ransom.

"That man indeed will be blessed. This is the kind of thing that will move Dominica forward…this lady may have taken this money as a loan probably to get some essentials for her children and here it is that money is returned to her. We can deem that as being a miracle, this ought to be given the highest commendation," said Weeks.