2016 on track to be world's hottest year on record: WMO 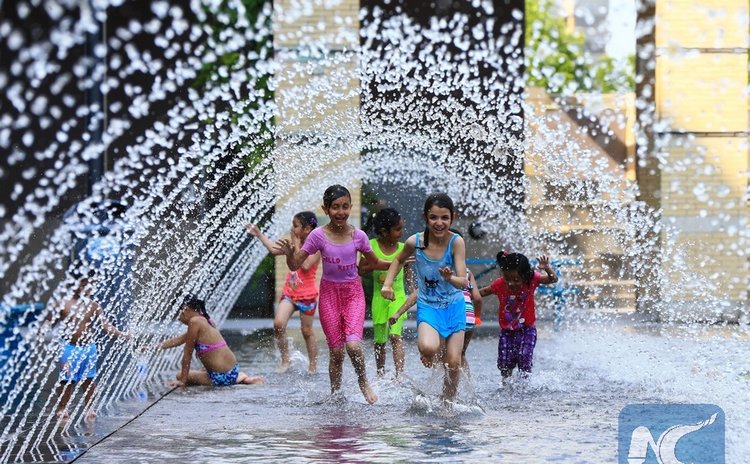 Children cool off in a wading pool in Toronto, Canada, June 20, 2016. Toronto issued an extreme heat alert on Monday, and the forecasted high was 34 degrees Celsius. (Xinhua/Zou Zheng)

GENEVA, July 21 (Xinhua) -- The World Meteorological Organization (WMO) on Thursday warned global temperatures for the first six months of this year shattered more records, meaning 2016 is on track to be the world's hottest year on record.

"Another month, another record. And another. And another. Decades-long trends of climate change are reaching new climaxes, fuelled by the strong 2015-2016 El Nino," said WMO Secretary-General Petteri Taalas.

"The El Nino event, which turned up the Earth's thermostat, has now disappeared. Climate change, caused by heat-trapping greenhouse gases, will not. This means we face more heatwaves, more extreme rainfall and potential for higher impact tropical cyclones," said Taalas.

Meanwhile, carbon dioxide concentrations have passed the symbolic milestone of 400 parts per million (ppm) in the atmosphere so far this year. CO2 levels vary according to the season, but the underlying trend is upwards. They showed a surprising increase for the first half of 2016, rising in June 2016 to nearly 407 ppm, 4 ppm greater than in June 2015.

United Nations Secretary-General Ban Ki-moon has invited leaders to a special event on Sept. 21 to deposit their instruments of ratification, acceptance, approval or accession to the Paris Agreement on climate change. It will also provide an opportunity for other countries to publicly commit to the agreement before the end of 2016