2020 CXC top student Hananel Valerie: "Focus on what you know is right for you" 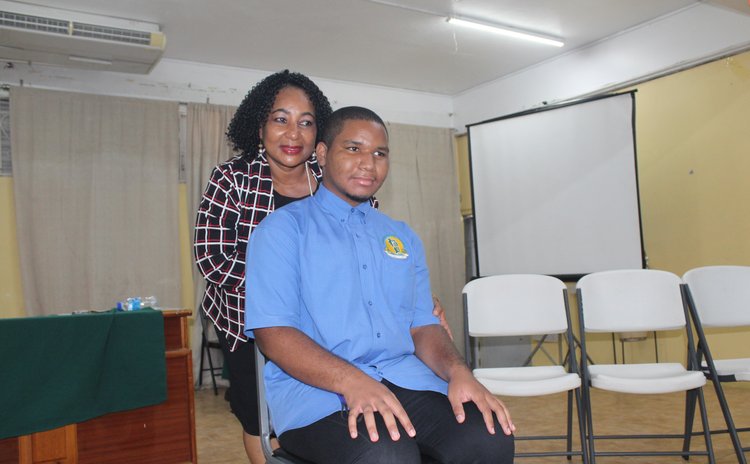 The soft-spoken 17-year-old told the SUN that his achievements are results of hard work over the five years. He is the son of retired deputy chief of police Hansel Valerie and Theresa Valerie.

"I must admit at a point I wasn't too sure if it was going to happen but I just want to say that I am happy," Hananel said. "I can't really put into words the emotions right now because it's been a long couple of months, but I just have to say that I am joyful."

He attributed his success to God, his parents, teachers and support team.

"They have all helped me through this period even especially at times when I felt like I couldn't go further, they have all supported me," he said. "They carried me at times when I needed someone to carry me through and gave me the information that I needed to do this exam and I want to thank everyone for this support because it's really an honor that I can represent my school and my country.

"I focused more on what I could do to thrive from the situation itself and I just want to use that to encourage others out there, that whatever you might be facing, don't look at the negative but look at how you can get through it because every time you climb a mountain, it's not to weaken you but to strengthen you. Because in life you are going to find many obstacles but the real success is when you can get through them and actually be confident that you did".

Currently a student of the Dominica State College (DSC) where he is majoring in biology, chemistry and physics, Hananel's goal is to become a forensic scientist.

Valerie encouraged his peers to "focus on one of your primary goals, because sometimes we get caught up in the male stereotypes which define us. If you know what you are doing is to help you and help those around you, keep to your goal and don't let people drive you with things that may seem pleasurable for now. Focus on what you know is right for you."

Hananel's studying partner changed from form to form, but in Fifth form it was more intense. He read a lot and always ensured that he read ahead of the current topic in class.

He plays music (the piano) in the Baptist Church but he finds time to play with his friends.

"Most of my friends know that certain things come first even when we went out, it was structured and organized," he said.

Hananel's father, Hansel, now a magistrate, said the news of his son's success did not come as an overwhelming surprise because his son has always been dedicated to his studies.

"During his days at SMA we played soft ball cricket together and also table tennis. We never pushed him, he knew what he had to do," he said.

"To say that we are very proud of him is an understatement. We encouraged him but we did not push him. We allowed him to go at his own pace, so we can now credit this achievement to his dedication, his seriousness to his studies but above all we know that it is God's doing.

"He has blessed him with a good mind and a good spirit and we have seen it throughout his educational career so far from preschool up to the present time."

He said although in 2015 Hananel was not the top student at the Grade Six National Assessment examination that was not an issue.

"He was among the top three. I can't recall his placement but we are not about that, it's about work and performance in school," he said.