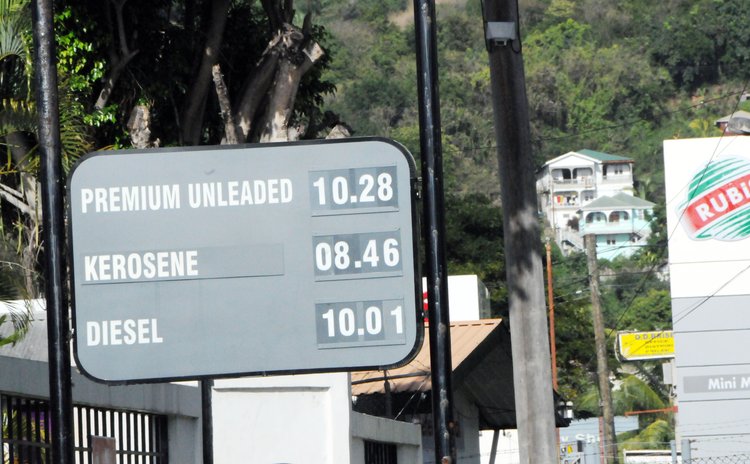 Prices of petroleum products on display at Canefield, Dominica

Roseau, Dominica, March 15- Petrol prices are expected to continue to tumble, oil analysts have suggested and the Associated Press (AP) reported last week. That is good news and bad news for the Dominican economy.

In Dominica earlier this month, the price of a gallon of petrol moved downwards from $10. 47 in mid-February 2015 to EC$10.28 at the beginning of March. Over the next few weeks it could fall below $10 per gallon for the first time since the early 2000's.

AP reported that crude oil prices could continue to fall sharply to below US$40 a barrel (that's from US $100 per barrel last year) and perhaps even briefly to US$20- if supplies grow so much that storage tanks full up.

Crude oil prices have collapsed because of rising global supplies, especially in the United States; worldwide demand has not kept pace with oil production, hence the fall in prices.

Low prices have forced drillers in the US to cut spending on new exploration and oil companies have laid off thousands of workers.

"But it is still unclear whether producers in the U.S. have cut back enough to help rebalance supply and demand. And while some OPEC members have called for the cartel to reduce output in an effort to force prices up, the group's most powerful member, Saudi Arabia, and other Gulf States have shown little interest in cutting back," AP has reported. "Despite the slowdown in drilling, U.S. production is still rising because projects started last year are still ramping up. Many oil companies say they can still make money at low prices if they drill only in their most cost-effective oil fields."

In Dominica, the drop in oil prices is having a positive impact on profit margins of businesses, especially taxi operators. But ultimately Dominica's economy may feel the impact of low crude prices because Dominica's economy is very dependent on Venezuela's. Venezuela is suffering because of the drop in prices of crude oil because more than 95 percent of Venezuela's export earnings depend on crude oil. Over the past decade Venezuela has become one of Dominica's main supplies of development aid especially through the PetroCribe arrangement.

In spite of his assurances, as the Venezuelan economy stumbles, President Nicolas Maduro may have no choice but to institute a review of development assistance to states like Dominica, analysts say.