Jury: Tyson is guilty of murder

Six-day re-trial of Kenrick Tyson ends like the first 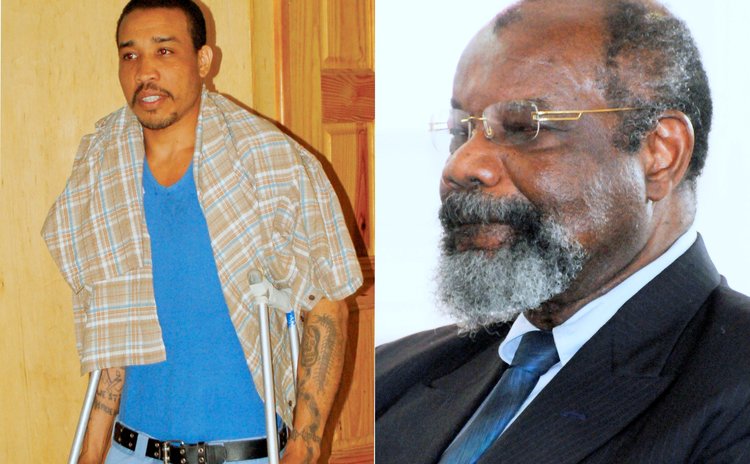 The trial or re-trial of Kenrick Tyson of Sinekou for the murder of Cecil James of Marigot at Lot No 6 Hibiscus Valley came to an end on Monday April 27, 2015 at 5:00pm at the end of a six-day trial before a jury of eight women and one man and Justice Errol Thomas.

Sherma Dalrymple led the case for the prosecution with assistance from fellow State Attorney Fernillia Felix while Bernadette Lambert and Wayne Norde conducted the defence.

The jury heard addresses from Counsel Dalrymple and Lambert followed by the summation of the case by Judge Thomas. The jury then went out for three and three quarter hours before returning a unanimous guilty verdict for the crime of murder against Tyson.

Justice Thomas set sentencing for May 22, 2015. At the first trial Tyson was sentenced to life in prison but his lawyers appealed to the Eastern Caribbean Supreme Court; the judges at the ECSC ruled that Tyson should be retried because the first judge made grave errors.

Before adjourning the court today, Justice Thomas thanked the jury for their service to the State, noting that it was the first time in his entire career as a judge, 11 years in two other jurisdictions, that a jury had recalled witnesses to the stand. Adding that he would like the names of the panel in case he had to write his memoirs, the judge stated.

He added that these were serious jurors—jurors beyond the ordinary and expressed approbation for the quality of English expressed in the questions of the jurors.

In his defence from the prisoners' dock for 10 minutes on Friday April 24, Kenrick Tyson told the Roseau High Court that he left with his girlfriend Narsha Daniel on 9th of May 2009 to go to the river to get crayfish.

"We passed some tracks went in Bataca, from Bataca we walked down to Number 6. When we reached No 6 I start making preparations for the river. So while we by the river I saw a gray jeep park. I saw a man come out from the jeep so when I saw that man I noticed that man was the one who burst out my head and took my gold chain. So I decided I going to hit him back and get my chain back. So I tell my girlfriend Narsha Daniel about it, so she tell me yes," he said.

"I walked through the hedges and approached the house, me and her. I had a gun in my hand. I put the gun down and I take a piece of wood and I decided I going to hit him. So me and Narsha we opened the door and I enter and I give him one lick with the stick. Me and him we started "rassling", and I fell in the bed me and him, and Narsha picked up the stick and start hitting him in his head. My lord, I didn't have any intention to kill anyone. My Lord I am sorry that happened. That's it Sir."

The prisoner had no witnesses while the state called nine.