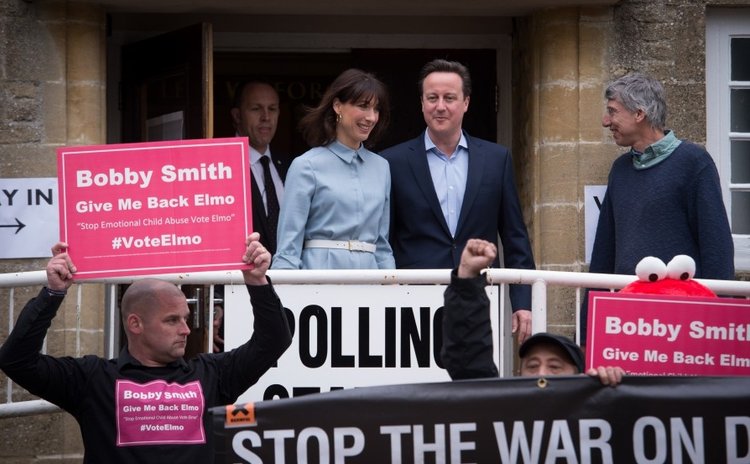 LONDON, May 8 (Xinhua) -- The Conservatives won an outright majority in Britain's 2015 General Election by getting 331 seats out of the total 650 seats in the House of Commons, according to the final results released Friday.

Meanwhile, leaders of Britain's three parties, including the Labour Party, the Liberal Democrats Party and the UK Independence Party, Friday announced their resignation as the parties' leaders after defeats in the election.

The Labour, Scottish National Party (SNP), Lib Dems and UKIP have got 232 seats, 56 seats, eight seats and one seat respectively.

Earlier in the day, David Cameron, British Prime Minister and leader of the Conservative Party, said that he will lead a government for "one nation" and will make "Great Britain greater", after the party won the election.

Cameron, who has secured his second term as British prime minister, also confirmed his promise to launch an in-out European Union referendum.

Speaking to his supporter at the party's headquarters on Friday, Cameron described the election result is the "sweetest victory of all."

Delivering a speech outside 10 Downing Street after visiting Buckingham Palace, he said he believed that the country was on the brink of "something special."

He said: "I have always believed in governing with respect. That's why in the last parliament we devolved power to Scotland and Wales, and gave the people of Scotland a referendum on whether to stay inside the United Kingdom."

He pledged to move as fast as possible with a plan to give more powers to Scotland, where the SNP won overwhelming seats this time.

He also confirmed his promise on the in-out European Union referendum. "Yes, we will deliver that in-out referendum on our future in Europe," he said.

Patrick Dunleavy, Professor of the London School of Economics (LSE), told Xinhua that he expects the in-out referendum to be moved forward to next year, rather than by the end of 2017. The event might withhold international investors' new project plans in Britain.

Speaking to his party staff and supporters, Miliband said it was time for "someone else" to take over the leadership and he was "truly sorry" that he did not succeed in the election with big-name casualties.

Earlier in the day, Ed Balls, Labour's Shadow Chancellor of Exchequer, lost his seat in the Commons.

Miliband, who took charge of the party in 2010, added: "I will never give up on fighting for the Britain that I believe in."

Clegg, who is also the ex-deputy Prime Minister of Britain, said he would quit as leader after a crushing set of losses, as his party members Vince Cable, Danny Alexander, David Laws, Simon Hughs and Charles Kennedy all failed to lock seats in the Commons. And some of them are ex-senior officials in the previous Conservatives-Lib Dems coalition government.

Nigel Farage, leader of the Eurosceptic right-wing UKIP, also announced his resignation after his failure to win the seat in South Thanet from the Conservative Party.

South Thanet is a constituency represented in the House of Commons of British parliament.

Pound soared by 1.10 percent to 1.5412 against U.S. dollars, in contrast with the flat performance a day earlier.

Vicky Redwood, Chief UK Economist at Capital Economics, commented in an analysis piece that with the Conservatives achieving an overall majority, British general election result is a "surprisingly market-friendly outcome" and removes the risk that the economy suffers a prolonged period of political uncertainty.