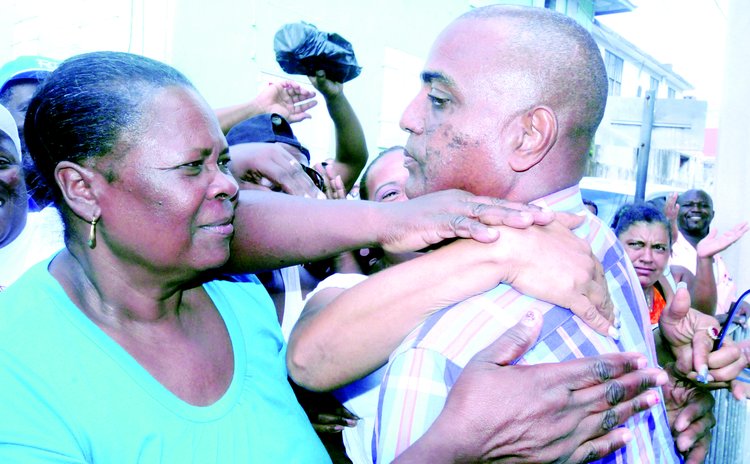 Lugay is embraced by supporters after leaving the magistrate'a court

They State has hired Trinidadian lawyer Gilbert Peterson to prosecute the case against Roseau North Member of Parliament Daniel Lugay in the matter in which he was charged for inciting murder.

Director of Public Prosecutions (DPP) Evelina Baptiste confirmed that Peterson would prosecute the case when the matter came up in court last week.

The police arrested and charged Lugay last year, against Baptiste's advice, after Alick Lawrence SC made a complaint to the police based on statements that Lugay made at a United Workers Party (UWP) public meeting in Soufriere in 2014. Lugay subsequently apologized for his comments.

DPP Baptiste told the court last week that she was holding papers for Peterson who was unavoidable absent. The matter, she said, "was in the custody of Peterson."

David Bruney, one of the lawyers representing Lugay, was not amused and asked that the case be "dismissed" because his client had "always been present in court while the complainant is yet to make a court appearance."

He also described the situation as "an abuse of the court" and called on Magistrate Bernard Pacquette to act in the interest of justice.

However, DPP Baptiste told the court that she was not at liberty to say certain things in open court and so asked to speak to the Magistrate and defense lawyers in chambers.

After that was done, Magistrate Pacquette returned and informed the court that based on information provided to him, Peterson was "sick" and so he is forced to grant the requested adjournment to the prosecution but it will be "final…final."

Lugay plunged into hot oil on 3rd July, 2014 when he said at a meeting of the opposition United Workers Party (UWP) in Soufriere that if he wasn't a Christian he would kill Senior Council Alick Lawrence.

Lugay, then a Senator in the Dominica House of Assembly, apologized publicly for uttering these words but he was charged for inciting murder and was placed on an EC$ 8,000 bail. He was subsequently suspended from parliament

A few persons have speculated as to the reasons and motives for the State's refusal to act on the advice of the DPP and why the Government has been spending money to prosecute Lugay is.

One lawyer who did not want to be named said: "What are they hoping to achieve…Alick Lawrence has never come to court, yet the State is spending money and bringing in a criminal lawyer to prosecute the matter, I am concerned about that."

Peterson is well known in the region for his prosecutorial skills and has been involved in many high profile criminal cases in Trinidad and Jamaica. Recently he appeared in Dominica in the criminal case for Earl "Seko" Grant and also Jahanni Gage.