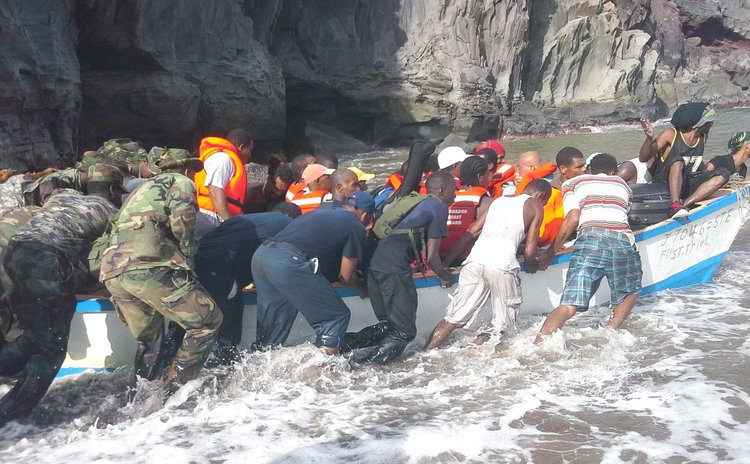 It is difficult to recall another period, another episode when Dominica received more international media coverage. The damage wreaked on the island by the floodwaters of Tropical Storm Erika generated global coverage by major networks and small outlets.

Leading broadcast, print and online media, particularly in the Caribbean and North America covered the devastation with varying degrees of interest.

Reports on the storm damage appeared in virtually every major news media, from Deutsche Welle in Germany to CBC in Canada to the Washington Post, to the more familiar CNN, NBC and the Weather Channel. The coverage for the most part focused on the damage and rescue efforts.

"Grim Reality," the headline on the front page of Barbados TODAY stated last Friday, with a pensive Prime Minister Roosevelt Skerrit looking down at a full-page photograph of damage at Macoucherie.

". . . the networks across North American to [took] up this information . . . those networks, like CNN and NBC and the Weather Channel. I think we are satisfied with the initial hours of coverage but I observed as from yesterday that CNN had dropped out a bit but BBC has started and last night PM Skerrit gave BBC 5 Live an interview and more will come," Charles Jong, the government's communications consultant told The Sun on Sunday morning.

Jong, who has been an integral part of the efforts to tell Dominica's story to the world in the aftermath of the storm, said it was critical that the information got out within the first 48 hours, showing the extent of the damage. But now, he said, emphasis was on getting out word of the urgent needs of the country.

"The priority right now is to get the priory [list] of the needs out now. Those lists were not available during the initial days of coverage and we are hoping this [the coverage] will happen now. I'm arranging for an hour this afternoon [last Sunday] for the prime minister to take any interviews via skype; we already have the Weather Channel and we are hoping to have more so we can get the information out about the needs. . .," Jong said.

Dominica's most noted historian Lennox Honychurch has been following the coverage from Barbados where he now resides. He told The Sun he was mostly pleased with the attention the media had placed on Dominica's plight.

"I have been following CNN, and BBC has been carrying information. It has been widely covered . . . I think it is accurately conveying things, because the pictures themselves are so dramatic. The back of the Sunday Sun [in Barbados] today has Prime Minister Skerrit touring some place [Bath Estate]. I think it's [the media coverage] an accurate reflection, Honychurch told The Sun.