President above the law 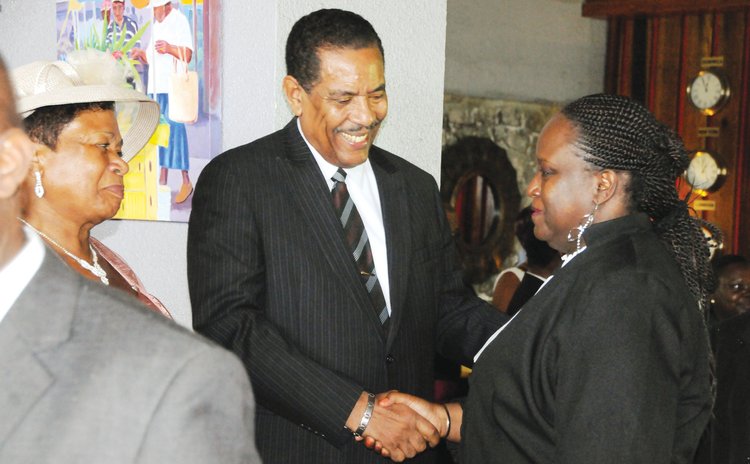 In a ruling of presidential proportions a high court judge has ruled that President Charles Savarin cannot be held responsible for his action while he occupies the palatial building on Victoria Street.

The judge has barred the Integrity in Public Office (IPO) Commission from publishing Savarin's name in the Official Gazette advising that he failed to comply with the IPO Act and declare his assets for 2013, concluding that to publish this information would bring the office of the president into disrepute.

It's a ruling that places Savarin above the law and gives the president free rein to do whatever he wants no matter how heinous, without having to worry about the consequences while he holds the country's highest office, one legal analyst has argued.

"If Savarin decides to go on a frolic one Sunday morning and decides to ignore the traffic laws and he decides to drive on the right side of the road at 50 miles [an hour] under the Canefield cliff, the law is held in abeyance?" asked this person who spoke to The Sun on the usual condition of anonymity because of the sensitivity of the case.

"What happens to the principle of law? So therefore he is above the law…Does the constitution in section 27 put him above the law?" The issue surrounds Savarin's obligation to file a declaration with the IPO. Up until 26 September 2013 Savarin served as a minister of government and, according to the IPO Commission, he was required by law to file a declaration by the end of March 2014.

Having refused to file, the commission attempted to publish a list of people who had not complied with the Act, including Savarin. However the Cabinet Secretary advised the Commission that having discussed the matter with the attorney general he would not approve publication of the list, and that the notice containing Savarin's name was contrary to section 27 of the constitution.

That section states that no criminal proceedings shall be brought or continued against the president or acting president for anything the person does or failed to do in an official or private capacity. It also states that "no civil proceedings shall be instituted or continued in respect of which relief is claimed against him in respect of anything done or omitted to be done in his private capacity."

This notwithstanding, the Commission attempted to get the government printer to print the list and again it was returned with a cover letter from the cabinet secretary explaining that it was against the constitution to publish Savarin's name on the grounds that as president he is immune from criminal or civil prosecution.

However, the Commission contended that its hands were tied because it was bound by the IPO Act which makes it clear in Section 22 that it "shall publish the fact [that the person failed to file a declaration] in the gazette and send a report to the Director of Public Prosecutions for further action."

Having reached an impasse, the Integrity Commission turned to the court in December 2014 for an interpretation of sections 16 and 22 of the Integrity in Public Office Act, 2003.

Judge Birnie Stephenson accepted the defence argument that the constitution protects Savarin. In her 29 September ruling Stephenson explained the constitution suspends any action or inaction on the president's part while he is still in office and that "the President is shielded from the institution of criminal proceedings which ought to and should include and preparatory steps which would likely result in the institution of criminal proceedings."

The judge also reasoned that to publish Savarin's name in the gazette or to present the DPP with a report for further action "would be flying in the face of the protection" offered by the Constitution and would bring the president's office to disrepute.

The legal analyst questioned this reasoning, saying the Commission was simply attempting to do what is required of it by law.

"The reasoning [for the judgement] could have been different. It's not the action of the Commission that brings the office into disrepute, it's the action of the person who refused to file the declaration [Savarin]," he told The Sun.

In further explaining her decision Stephenson referred to the fact that the charge can be held in abeyance and reinstituted after Savarin demits office.

However, the legal analyst who spoke to The Sun suggested that common sense must be applied to any law. "If he went to the market and he buys. . . all the red fish and he refuses to pay the woman, that law is in abeyance? Is the reasoning in [Section] 50 saying that law in contract is held in abeyance for him?

"The Act is clear. Parliament did not say if he became a judge, a vagrant or a president. . . These were the directives that parliament gave the commission and they were clear and unambiguous."

While Savarin refused to file a declaration, his predecessor Eliud Williams had no such difficulty. Williams, who served as president from 17 September, 2012 to 1 October, 2013 filed a declaration for 2012 while still president in 2013

The lawyer for the Integrity Commission Kevin Williams was out of state and could not be reached to find out if there would be an appeal. Senior Council Tony Astaphan, instructed by Marie-Therese Etienne of the AG's chambers represented the attorney general.