Taylor climbs to third in batting rankings; gains for Pakistan players despite defeat 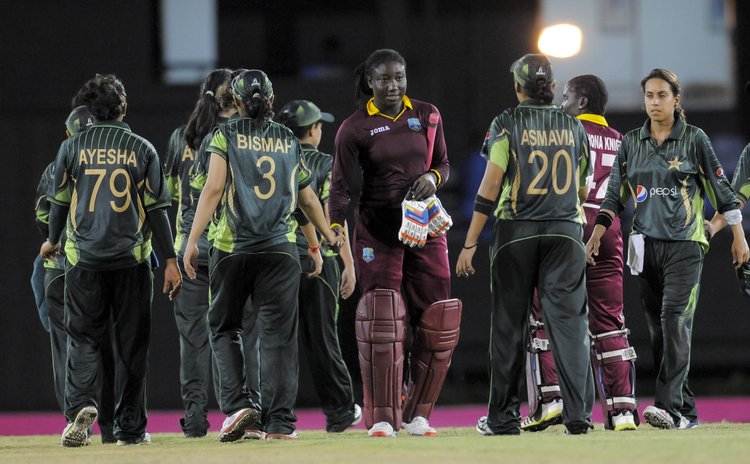 Taylor, the West Indies women cricket team captain shakes with the Pakistan team after the match

Following its 3-0 win over Pakistan in St. Lucia on Saturday, the West Indies has joined world number-one Australia on the top of the ICC Women's Championship table.

The tournament structure sees each team will play each other in one home or away series that will include three ODIs over a two and a half year period. As such, each side is guaranteed, at least, 21 ODIs over the tournament period.

Pakistan played four ODIs against the West Indies on the tour and though it won the opening match of the series, only the last three matches counted towards the ICC Women's Championship. Nevertheless, all four matches count towards the ICC Women's Team Rankings, which has seen no changes to their pre-series rankings except that both have gained one point each. The ICC Women's Team Rankings will now be updated at the conclusion of the three-match T20I series, which will be played in St George's, Grenada, from 29 October to 1 November.

Reflecting on the series victory in the aftermath of Saturday's win, West Indies Women's team coach Vasbert Drakes said: "I thought that we executed really well throughout the series and recognised the importance of trying to dominate this game, and we did that really well.

"The consistency in everyone was a highlight. Merissa Aguilleira improved tremendously batting at number-five, while Stafanie (Taylor) showed again why she's the best player in the world. She dominated again and led from the front. Kyshona (Knight) batted well and Shamilia (Connell) bowled really fast and consistent.

"It was a collective effort with everyone contributing as a group. Going forward we know that we still have a lot of work to do but we can look forward to the South African leg."

The West Indies won the opening match of the ICC Women's Championship by three wickets and then took an assailable 2-0 lead by winning the second match by 109 runs. It swept the series with a six wicket win.

In the ICC Women's ODI Player Rankings for Bowlers, Anisa Mohammed has retained her second place behind runaway leader Jhulan Goswami of India, while 24-year-old skipper Taylor has dropped one place to fourth. There was better news for Tremayne Smartt who has vaulted four places to 14th.