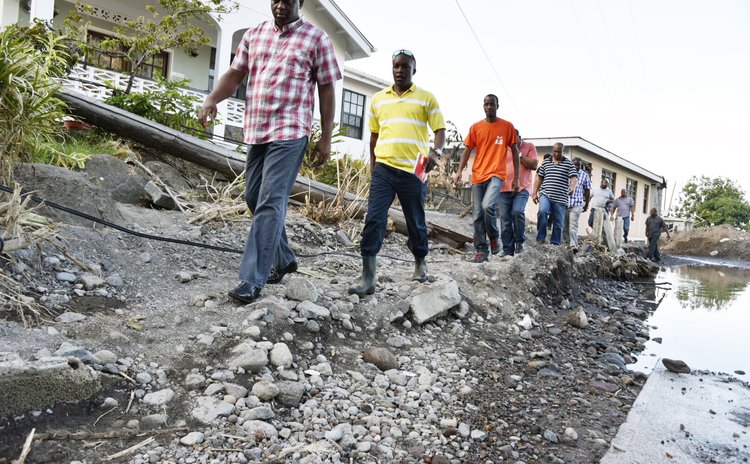 Touring the Colibistrie disaster area after Erika, John , 2nd, PM Skerrit, first in row, and others

The Coulibistrie River is a threat to life and property, but vital dredging operations to alleviate the danger have ground to a halt.

Coulibistrie Parliamentary Representative Hector John said this is because some heavy equipment operators involved in dredging downed tools to protest not being paid.

John said the operators' decision to stop working to protest long overdue payments by the state was compounded by heavy rainfall in the area over the past few weeks.

He noted that some contractors have not been paid for any work they did in since Tropical Storm Erika dumped 12.5 inches of rain on Dominica on August 27 causing widespread destruction.

This week, only some of the truckers were paid, he said.

He added, "If people render service to the state they expect to get paid and when the state continues to delay payment you put a pressure on the community and the people living there."

John pointed out that the contractors and equipment owners have to service equipment, replenish their supplies and provide for their families.

Emphasising the serious threat the river poses, John pointed out that the river bed is at the same level as the nearby road and some properties— and, in fact, it is above the level of a few properties.

He warned that the situation worsens the challenges Coulibistrie residents have endured since the storm and this could create legal issues if it is not addressed before a calamity occurs.

The Parliamentary Representative cautioned that the river mouth needs to be dredged urgently so the water to flow freely out to sea, adding that flooding is inevitable unless this is done soon.

In the short term, John wants the mouth of the river and up to about 1,500 feet along its length to be dredged urgently, and boulders to be stacked along the river's banks.

In his view, erecting appropriate retaining walls along the river's banks is the most viable long-term solution to protect property and lives in Coulibistrie.

Furthermore, John maintained that rivers in Coulibistrie and other flood-risk areas in Dominica must be dredged regularly to protect lives, property and infrastructure.

In his opinion, such areas have not been dredged enough since Tropical Storm Erika so they remain at high risk for extensive flooding.

John is also urging the authorities to check every bridge, waterway and canal on the EO Leblanc highway.

Government has to make some serious evaluations of these bridges, canals drains [on] the Oliver Leblanc highway and repair them as soon as possible…" John said.

He is also calling for extensive dredging to be done in the Salisbury, Mero, Macoucherie, Batalie, Layou and Bolo Rivers.

John pointed out that some of these rivers pass through villages and pose serious threats to their residents, especially during storms with high-intensity rainfall.