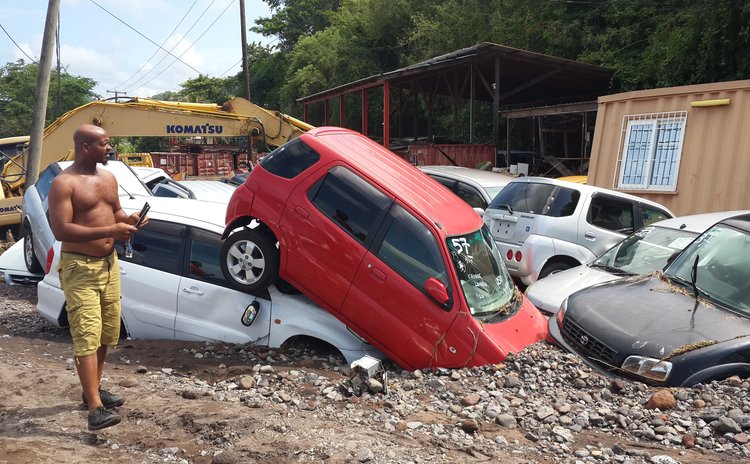 "This is a disaster of epic proportions… the damage is massive", said Prime Minister Roosevelt Skerrit in a statement after Tropical Storm Erika devastated Dominica on August 27, 2015.

Tropical storm Erika is now confirmed as the deadliest storm to hit the Dominica in 36 years. It formed on August 24 as the fifth storm of the 2015 Atlantic hurricane season and it was immediately classified as a tropical storm. Meteorologists say it reached peak intensity with winds of around 50 mph on multiple occasions before and during its deadly path through Dominica.

At least 30 persons were confirmed dead and many more were reported missing.

PM Skerrit estimated that Erika had left Dominica with a $1.3 billion reconstruction bill.

Many believe Prime Minister Skerrit made a serious error in canceling the 2015 World Creole Music Festival after TS Erika.

The minister of tourism Robert Tonge muddled the waters when asked he asked the private sector to organize another show but that too did not kick off. Erika ensured that the show must not go on in 2015.

Ninety employees of the Colgate Palmolive, formerly the Dominica Coconut Products (DCP) were without jobs on December 30th 2015 because the company shut its doors. But Prime Minister Roosevelt Skerrit told the press that the Government of Dominica will save the day for the employees in the short and long term i.e. give the workers financial support and probably buy the plant.

Colgate Palmolive announced its intention to close DCP during a general meeting on November 19, 2015.

In 2013, Judges of the Eastern Caribbean Supreme Court (ECSC) overruled a lower court decision which had slapped heavy fines on Linton and others for alleged defamatory statements made regarding Pinard-Byrne, the accountant and former owners' representative of the ill-fated Layou River Hotel that Pinard-Byrne has described as a construction disaster.

Not satisfied with that decision, Pinard-Byrne took the case to the Privy Council and the matter was heard in April 2015. It ends there.

The Salisbury saga began when villagers blocked the Edward Oliver LeBlanc Highway at several locations on Thursday June 11, 2015 one month after their first protest action.

About 30 villagers are now before the court on charges of "unlawfully, riotously, tremulously" assembled together …to cause a disturbance of the peace and that he did not disperse "within the space of one hour" when (they were ordered by the police) to do so.

When parliament met on Wednesday 27th May, Prime Minister and Minister of Finance, Roosevelt Skerrit introduced the controversial 2015 Banking Act.

That Act provided for the regulation of the banking business, the establishment of a single banking space and for incidental and related matters and the repeal of the Banking Act No. 16 of 2005.

The pending debate in the House of Assembly follows a statement issued on May 7th 2015 by the Governor of the Eastern Caribbean Central Bank, Sir K. Dwight Venner, who revealed that the ECCB Monetary Council "had decided to the passage of a new Banking Act to provide greater protection of depositors and increased regulation of banks in the sub-region in keeping with new international requirements."

However, Opposition United Workers Party (UWP) parliamentarians argued that the new Banking Act allows the ECCB too much power to control the operations of financial institutions and it will be disastrous if it is implemented in its current form.

Dozens of immaculately dressed dignitaries from near and far met at the new splendid multi-million dollar Chinese-built State House to witness an historic occasion. They heard the Sisserou Singers sing and watched them dance with precise steps and gestures and Michele Henderson, Dominica's newest song-bird delighted with her rendition of the award-winning "Celebrating CARICOM".

The occasion was Dominica's ascension to the Caribbean Court of Justice (CCJ) as its final appellate court. The ceremony was held on Friday, March 6, 2015.

"In a certain way the Caribbean Court of Justice has always been your court but today it is completely your court in every respect and now it is the final court of appeal to the Commonwealth of Dominica," said the President of the CCJ the Right Honourable Sir Charles Michael Dennis Byron.

But before that one CARICOM prime minister practically called another a liar in the boiling controversy over nominations for the post of Commonwealth Secretary General.

Dominica was caught in the middle of a swirling controversy between the leaders of Antigua & Barbuda and Barbados.

At the heart of the controversy was the selection of a Caribbean candidate for the post of Commonwealth Secretary General.

The 15-member Caribbean Community (CARICOM) normally agree and support a single candidate for top international positions. However, both Antigua and Dominica put forward nominees and neither was willing to back down.

Prime Minister Roosevelt Skerrit nominated the Dominica-born British jurist Baroness Patricia Scotland, much to the annoyance of many CARICOM leaders who point to the fact that she left Dominica at age two, dedicated her entire career to Britain and had never worked for Dominica or any Caribbean government or institution.

The other CARICOM candidate was Sir Ronald Sanders, the Antiguan ambassador and diplomat. He failed to make it beyond the first round in the Malta election.

The big news in Dominica in 2015 was that five police officers, including a woman, were charged with murder, eight months after the body of a prisoner was found in a cell at a police station in Portsmouth, Dominica's second town.

That case drew public attention not only because it's unusual for police officers to be charged for killing prisoners but the action of police authorities and lawyers in protecting the officers from the court and public scrutiny has raised many eyebrows.

The five officers were detained after an autopsy was done on the body of Joshua Etienne, who had been arrested on August 4, 2014 for the alleged possession of ammunition. Etienne's body was found dead in his cell on August 5, 2014.

Following their arrest in August 2014, the defence had argued that the charges were unlawful and irregular and as a result they should not be read to the accused. But following months of legal wrangling, the judicial review was discontinued and the magistrate's court read out the charges to the accused.

One year after the Chikungunya Virus caused by the Ades Egypti Mosquito invaded Dominica the country's "army" said the battle was won. In February 2015 there was no more Chikungunya.

"The first case was just about late January early February in the village of Good Hope, then from Good Hope it spread to the suburbs, then it went to the major areas, then Woodford Hill and Bath Estate which were really the two communities that had prone Chikungunya and from there it just took over the island," stated Anthony Scotland the Chief Environmental Health Officer.

Speaking to the Sun about the latest situation concerning the disease, Scotland said he was prepared to declare that the Chikungunya Virus Epidemic is officially over.

There were 173 confirmed cases, 3590 suspected cases but no deaths, stated Scotland.