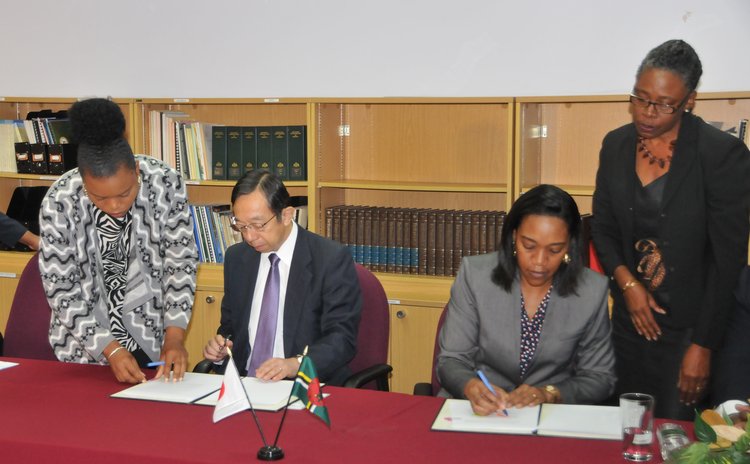 Japan has provided a grant of US$1.62 million to Dominica for the purchase of disaster reduction equipment.

The two countries signed the agreement at the Ministry of Finance Conference Room on January 22. Minister of Foreign Affairs and CARICOM Affairs Francine Baron signed for Dominica and Deputy Head of Mission and Minister Counsellor for the Embassy of Japan Masotoshi Sato signed on behalf of Japan.

"It is well known that countries in the Caribbean including the Commonwealth of Dominica are particularly vulnerable to natural disasters and climate change," said Sato.

He noted that the damage caused by Tropical Storm Erika in August 2015 which Dominica suffered is a case in point.

"It is our hope that this grant aid programme will not only reduce disaster damages in the Commonwealth of Dominica in the future but will also support against climate change," he said.

Meanwhile, Minister of Foreign Affairs and CARICOM Affairs Francine Baron said Dominicans know all too well the importance of being properly equipped and prepared to respond to disasters particularly as the country faces increased threat because of climate change.

She noted Dominica and Japan have had several years of diplomatic relations and post Tropical Storm Erika Japan's response in assistance was immediate.

In the past Japan has helped Dominica through technical training in Japan, provision of experts through the JICA programme and also grant assistance for the grass roots human security projects for fisheries and industrial products.

Therefore, many Dominicans have benefitted significantly from these training opportunities.

Furthermore, she informed that apart from the technical assistance the Government of Japan has also provided financial assistance.
She noted that their financial contribution have gone towards several development projects such as local government, non-governmental organizations, hospitals and schools which are under their grass roots programme.