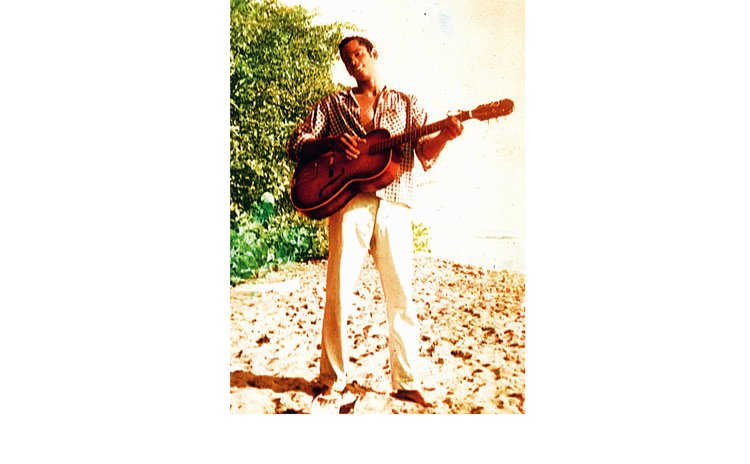 Edward Martin with his guitar

Some things cannot be un-seen.

Some memories cannot be erased.

Certain experiences change us forever, leaving dark pockets of sadness in our minds and difficult memories sometimes seep through our protective barriers to distress us again.

Dominican Atherton 'Athie' Martin had that kind of life-changing experience when he was only 17 years old.

In just a few minutes, the infamous Carnival 'mystery fire' scorched an indelible memory in his mind, one that has endured for over half a century.

The fire killed three persons -- including his brother -- and left several others deeply scarred, physically and mentally.

Minutes before the fire, Athie was a happy teenager having fun in the hot afternoon sunshine of Carnival Monday, February 25, 1963

He was playing 'lead-pan' in a 'steel band' styled The Mexican Band. Behind the band, his eldest sibling Edward 'Eddie' Martin was tramping with two close friends-- Eric Shillingford and George James.

Eric was a young businessman who had successfully introduced a modern Vauxhall car dealership to Dominica. Some say his professionalism and business savvy did not go down well with competing car dealers.

George was a gifted saxophonist and Eddie was a talented guitarist with "a fine scholastic record", according to the Dominica Herald newspaper.

Together, they cut striking figures as they reveled in their 'sensay' costumes, each over six feet tall.

These traditional costumes were made from frayed lengths of rope with protruding fibrous strands sewn onto coats and trousers.

The three always tramped together at carnival time. That year, Eric-- a young businessman with a promising future-- had sponsored the steel band behind which they were dancing.

"All of us heard a . . . vooop!" Athie recalls, vocalizing the audible ignition of the flames.

"We all heard that. When we looked back we saw the three costumes on fire."

Eric had the presence of mind to roll on the ground and persons around were able to put out the fire that was ravaging him.

Concerned persons also rolled George on the ground, but Eddie ran up the street with his costume ablaze.

Athie said his brother must have realized the danger to others, so he decided to run away from the crowd.

For a split second that seemed like an eternity, Edward stood there—alive as the flames enveloped him.

Heedless of the heat, Athie tried to run towards his brother, but members of the public restrained him so he would not get hurt.

"I watched him burning-- alive--screaming-- and literally looking at me…" he says.

The scene is branded in the young man's memory and haunts him to this day.

Athie ran to his house to tell his parents and found his mother and some neighbours there. His mother told him his dad had gone to the hospital because Eddie was in an accident.

Realising that she didn't know the seriousness of the situation, he ran back to the scene of the fire. There, he glimpsed his father driving at top speed towards the hospital.

What happened afterwards is a blurred memory.

Suspicions about the origin of the fire, which a controversial Commission of Inquiry failed to determine conclusively, filled Athie with anger for a long time.

And he repeatedly relived the horror in nightmares, which tortured him for many years.

Then, one night he was comforted by a dream of his brother's smiling face. The nightmares never returned.

Eric Shillingford and George James both died shortly after the fire.

Eddie was laid to rest after a funeral procession based on the last float parade he had enthusiastically organised for carnival, themed "Burial of the Pharoh".

According to the book 'Death by Fire' by Gabriel Christian and Irving Andre, the mourners were dressed in old clothes, strips of clothing, sensay, velvet, taffeta, crepe paper, raffia, oversized diapers and a shiny cloth.

"But the sounds of the masquerade were largely silent," the book stated.

Although the Commission of Inquiry's investigation into the cause of the fire was inconclusive, suspicions that it was no accident persist even today.

In an article posted on virtualdomincia.com, former Chief Cultural Officer, Raymond Lawrence noted that the fire "changed the course of Carnival dramatically" and the authorities subsequently banned sensay costumes and masks.

"…I remember that the Carnival in the following year; 1964, had been reduced to a shadow of what it had been previously. As a matter of fact, there were persons who decided to stop playing Carnival from that year because of the fire incident," Lawrence said.

More than 50 years on, the scars still run deep.