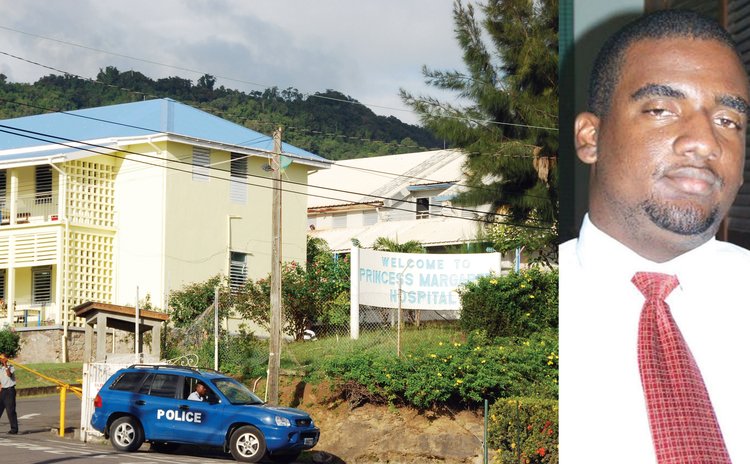 Andrea Christian, the mother and personal representative of the estate of Trevor Christian (who died on 19 September 2015 at age 30) has filed a lawsuit for negligence against five doctors and Dominica's attorney general.

According to court papers obtained by the SUN, Trevor Christian arrived at the Princess Margaret Hospital (PMH) casualty department on September 14, 2015 at 12.20pm and was seen by a doctor approximately one hour later.

The document said Trevor had a "septic look, sweating and on abdominal examination revealed tenderness and rebound in the right lower abdomen".

He was admitted to the surgical ward within 30 minutes after the doctor examined him.

The document said a doctor saw the patient again at 3pm that day but he was not assessed again until 8am on September 15, 2015 when that pain was "worse and physical signs of peritonitis were confirmed".

At the operating theatre, Trevor underwent an "appendectomy and peritoneal lavage of pus".

However, between 15 and 17 September 2015 the patient displayed rising and swinging temperatures and he was transferred to the Intensive Care Unit of the PMH. On 17 September he underwent a second operation and at 9.25pm on that day his health was recorded as "significantly declined".

He was placed on a ventilator and he was described as "very critically ill". He had a persistently high fever while at the ICU.

On September 18, 2015 he remained "very critically ill with a high fever throughout the day".

The documents name four doctors including a private doctor who had attended to the patient on September 12 & 14, 2015 and had himself brought Trevor to the casualty department of the PMH.

The suit states that the deceased suffered a perforated appendicitis due to "mis-diagnosis" by the first doctor and/or another medical practitioner and/or servants or agents of the hospital.

According to the court document, a demand letter was written to the defendants on March 4, 2016; however, they have failed and/or refused to pay the sums as claimed, or any sum at all.

"In the premises, the Claimant claims the sum of EC$21,473.03 as special damages to date plus general damages, plus interest calculated at such rate and from such date as the court thinks fit pursuant to statute and cost."

The claimant also demanded damages for pain and suffering, loss of amenities, lost earnings and loss of expectation of life.

The claim was filed by lawyer Kelvin John solicitor of the Chambers of Alick Lawrence SC.

David Bruney is representing one of the doctors and he has filed a defence dismissing the claims. In his brief Bruney provided a detailed sequence of events and denied that the Claimant is entitled to the relief that she has demanded.

"The 6th defendant maintains that had he been the deceased operating surgeon he would have had him on the operating table within the next six hours after seeing him the second time on Monday September 15, 2015," Bruney said in the defence.

He added that the PMH had refused the doctor certain privileges related to the performance of surgery and since he was not on staff he "had no access to diagnostic studies done at the hospital".