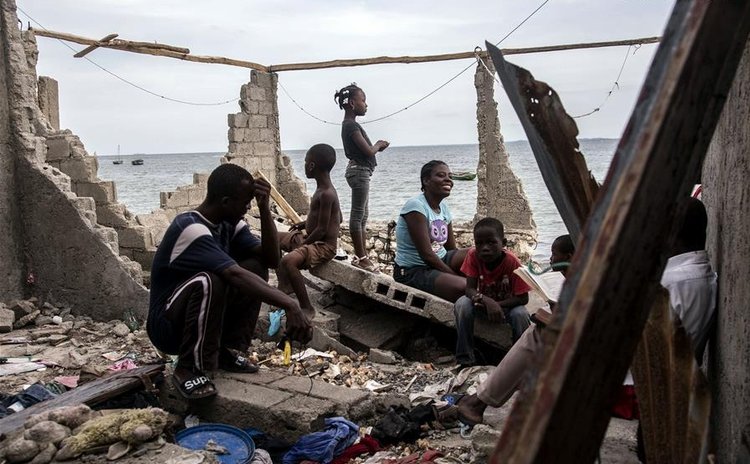 Image provided by the United Nations Children's Fund (UNICEF) shows people sitting on a structure devastated by Hurricane Matthew, in the neighborhood of La Savane, Les Cayes, Haiti, on Oct. 9, 2016

UNITED NATIONS, Oct. 11 (Xinhua) -- One week after Hurricane Matthew slammed into Haiti, and as schools re-open across the small island country, more than 100,000 children will be missing out on learning after their schools were either damaged or converted into shelters, the UN Children's Fund (UNICEF) said here Tuesday.

"At least 100,000 children today will not experience the joy, safety and stimulation that being in a classroom brings," said Jean Metenier, the UNICEF deputy representative in Haiti. "We need to get them back to learning as soon as possible."

"Hurricane Matthew took away their schools, homes and textbooks. It shouldn't take away their sense of hope," Metenier said in a press release issued here.

According to initial national estimates, at least 300 public schools have been partially or entirely damaged in the Caribbean country and many others are being used to shelter displaced families. Schools in Sud and Grande Anse departments will remain closed for at least another week.

UNICEF is working with partners to help set up temporary learning spaces and deliver school supplies. Priorities include the efforts to rehabilitate damaged schools, provide students and teachers with adequate school supplies, schools furniture and teaching materials; and provide children with psychosocial support.

In Haiti, around 20,000 houses were destroyed, more than 15,600 people were evacuated and the death toll could reach over one thousand, once the problems surrounding communication, electricity and roads corroborate the magnitude of the damage, according to figures from the UN Office for the Coordination of Humanitarian Affairs (OCHA).