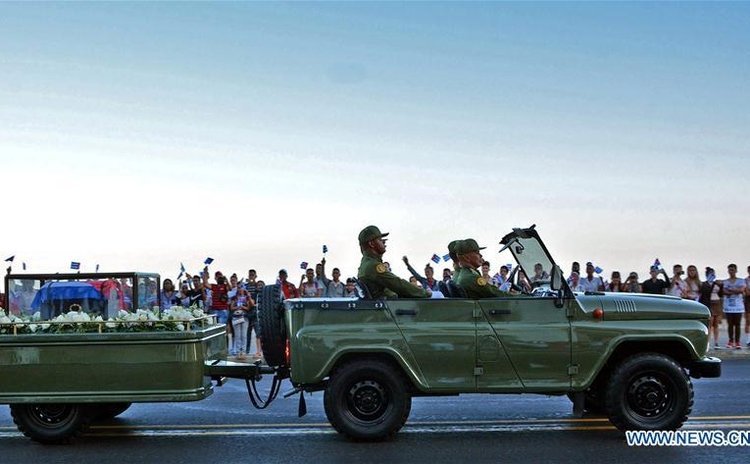 The caravan carrying the urn that holds the ashes of Cuban revolutionary leader Fidel Castro is greeted by people at Malecon Habanero Avenue in Havana, capital of Cuba, on Nov. 30, 2016

HAVANA, Nov. 30 (Xinhua) -- The funeral procession bearing the ashes of Cuban revolutionary leader, Fidel Castro, began its journey Wednesday from Havana to the resting place in Santiago de Cuba, where he first launched his revolutionary movement and claimed victory in 1959.

Castro passed away on Friday at the age of 90. The Cuban government declared a nine-day national mourning starting from Monday, with a ceremony drawing thousands at Havana's Revolution Square.

President Raul Castro, the late leader's younger brother, led the farewell ceremony along with other relatives and dignitaries.

The urn carrying Castro's remains was covered with a Cuban flag and white roses, and placed in a military vehicle that drove through the avenues of Havana.

A huge number of people gathered along the route to say goodbye to the man who marked the 20th century, while chanting "Long live Fidel" and "I am Fidel."

A two-day homage on Monday and Tuesday gathered Cubans from all generations in the island's main squares to pay tribute to the founding leader of the revolution.

The procession will last four days, travelling over 1,000 km and across 13 of Cuba's 15 provinces to Santiago, where Castro will be laid to rest on Dec. 4 in the Santa Ifigenia Cemetery.

The procession is in honour of Castro's Caravan of Freedom, which began after dictator Fulgencio Batista fled the country on Dec. 31, 1958.

In the famous journey, the former president was accompanied by around 1,000 members of his rebel army that left Santiago de Cuba on Jan. 2, 1959 and arrived in Havana six days later.

"This is a decisive moment of our history. Tyranny has been defeated. (Our) happiness is huge. However, much remains to be done. We cannot let ourselves be deceived in believing all be easy from now on. It may be that the most difficult is yet to come," the former leader said in a speech to the Cuban people.

Then went the moment that lives in the memory of Cubans who have witnessed when three white doves were released, with one landing on Castro's shoulder.

Since then, revolutionary youth in Cuba have re-enacted the march of the guerrilla forces every year.