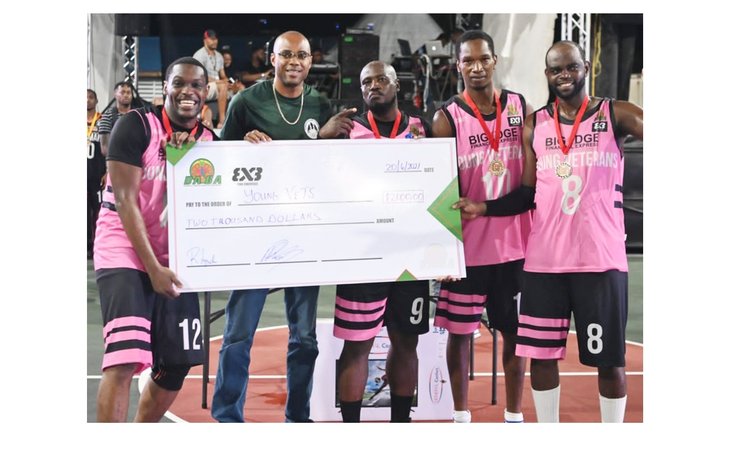 Those of us who ran the courts in the afternoons or mornings at Windsor Park, SMA, La Plaine, Portsmouth, Grand Bay, Lindo Park, Massacre and other basketball centres played a game known simply as '3-3', which was also dubbed a 'half-court' game. Other half-court games that we engaged in were 2 against 2 (2-2), 'Rough 21' and rarely, 4 on 4 encounters. Such games were extremely competitive and were played when there were insufficient numbers of players to undertake a 'whole-court', i.e. a 5 versus 5 full-court encounter.

3-3 games were mostly pick-up games but a few years ago, around 2004 or 2005 basketballers in the community of La Plaine organised a 3-3 mini-tournament which attracted 10 teams. Subsequently, a 3-3 team from that village engaged a counterpart team in a 'friendly' in Grand Fond. Other communities in Dominica's basketball centres may probably have organized their own 3-3 basketball competitions.

In today's basketball arena we now hear of 3x3, and this is not just a game involving six guys "hungry for a sweat". The game is even sanctioned by the world governing body for basketball, the Federation Internationale de Basketball Amateur (FIBA), and at the local level the Dominica Amateur Basketball Association (DABA) has among its ranks, a 3x3 Committee to take care of 3x3 matters.

Dominica's 3x3 Journey: According to DABA's 3x3 Coordinator the beginning of FIBA's intensified focus on 3x3 basketball came to the fore in 2007 when the Federation decided that it would experiment with an alternative form of the sport at the 2010 Youth Olympic Games which were held in Singapore. 3x3 was then promoted as 'The hottest ticket in town'.

At the local level and a decade later, under the auspices of the DABA Dominica held its inaugural 3x3 competition which tipped off on the Lindo Park hardcourt at Goodwill, on 13th June 2017. Four (4) teams participated, all of which comprised 100% males. That competition was preceded by a training session introducing 3x3 to the players and officials, and was facilitated by Sanjay Jiandani from St. Vincent & The Grenadines.

Team Falcons, which hails from the southern village of Pichelin and which comprised Javie Bellot, Ramal Carbon, Yannick Régis and Edmund Williams Jr. created history when they won the first 3x3 competition in Dominica.

The second 3x3 tournament organised by the DABA was held exactly one and a half weeks after the first event, on 24th June 2017. That competition was held on the Dame Eugenia Charles Boulevard in Roseau where an area on the Bay Front roadway was customized to form the layout of a basketball half-court surface. A transportable backboard and rim completed the on-court facilities.

After the first competition which was mainly for players, 3x3 was introduced to the Dominican public through the Dominica Olympic Committee which was holding its annual Olympic Day event on 24th June. It was an Olympic Day celebration with a difference, where each local sport falling under the Olympic umbrella got the opportunity to showcase their specialty.

That Olympic Day 3x3 competition, which was organized by the 3x3 Coordinator and the then DABA Secretary-General, Martin Dyer, involved six (6) teams and was won by Young Veterans of Massacre. The other participating teams were 767 Sports Club, Ballers, Buckets, Hoop Heaven and Westside Thunder.

3x3-2021: What can be described as the biggest basketball event on Dominica for 2021 was the staging of the 3x3 Tournament, which was played under the theme, "It's All About 3".

The Windsor Park Sports Stadium forecourt became alive once again from 18th to 20th June 2021 for the Grand Finals, as 16 teams – including 4 women's teams – all clad in colorful uniforms displayed their skills and competed for prizes and awards that had some players smiling as they made their way back home after the tournament. Of course, there were separate men's and women's competitions.

The women's teams which participated in the Grand Finals were Hot Shots, Lady Ballers, Northern Stars and So What.

It should be noted that leading up to the Grand Finals were three male and one female qualifying events. Continues next edition