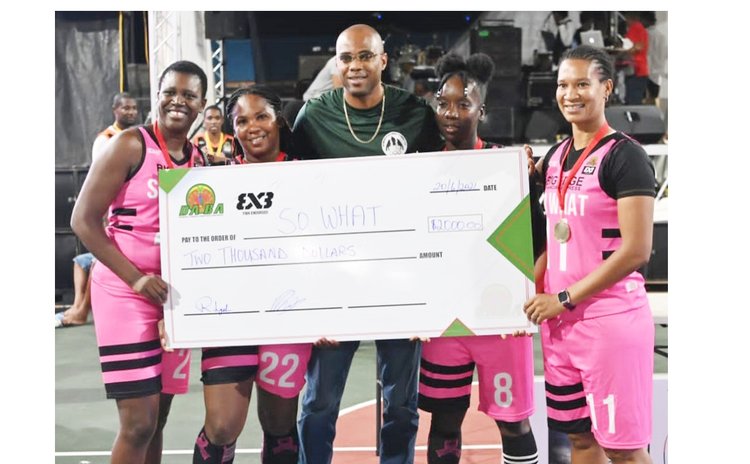 SO WHAT, Women's Competition winner in 3x3-2021 Grand Finals; with DOC Representative

Part I of the article focused on Dominica's 3x3 journey including two tournaments held in 2017, and the commencement of the presentation on DABA's 3x3-2021 Tournament. The article continues below.

3x3-2021 Grand Finals Prizes & Awards: It can be said without hesitation that the champion teams and runners-up in DABA's 2021 3x3 Tourney scored handsomely as some $6,400 was shared out as prize money among six teams; four individual awards and prizes were also up for grabs.

Individual Awards presented after the Grand Finals were as follows:

DABA's 3x3-2021 Tournament was hailed a success and according to Mrs. Francis-Lynch, they "had a very decent turn out despite the heavy rainfall on all three days. Fans witnessed a display of talent from basketball players along with patronizing the many vendors present."

The 3x3 Committee also extends Special Thanks to Simeon Joseph who was instrumental in organizing the event, and to all the players and officials.

FIBA also contributed to the success of the 3x3 Grand Finals with the generous donation to the DABA of a Mobile 3x3 backboard and rim which were unveiled at the event.

The sponsorship collectively took the form of prizes and awards, uniforms, equipment, marketing and raffles. Jump Ball joins the DABA in saying a BIG THANK YOU to all the sponsors for their generosity and for their invaluable contribution in making the event the success that it turned out to be. Remember, It's All About 3!

Selected for Pan Am Games 2021: Dominica had earlier qualified for the 3x3 Basketball segment of the Under-23 Pan American Games and a team of four players – Maxwell Birmingham, Shamar Felicite, Kiefer Francis and Keniah Lloyd – and the 3x3 Coordinator was selected to represent Dominica at the Games which were scheduled for 3rd to 5th November 2021 in Columbia.

Unfortunately, due to flight issues, Team Dominica did not make it to Columbia to participate in the Games which the entire team was eagerly looking forward to.

3x3 Rules: In "ole-school" 3-3 games, the first team to reach 10 points is the winner. There is no time limit as to how long an encounter would last as players played primarily for fun. There is no referee, and on-court disputes are usually settled amicably and the game would continue.

The modern 3x3 game, however, is a completely different 'ball game'. For one, teams comprise four players, including one substitute. The ball used is a size 6 ball which is made for better handling. That ball is smaller and lighter than the one used for a 5-on-5 game and is made from composite or synthetic leather for better grip.

3x3 Games follow most of the same rules as regular 5x5 games, but there are some interesting differences.

*The duration of a game is 10 minutes playing time and, importantly the first team to reach 21 points would be the winner. However, if neither team reaches that threshold, then the team with the greater number of points at the end of the 10 minutes would be declared the winner.