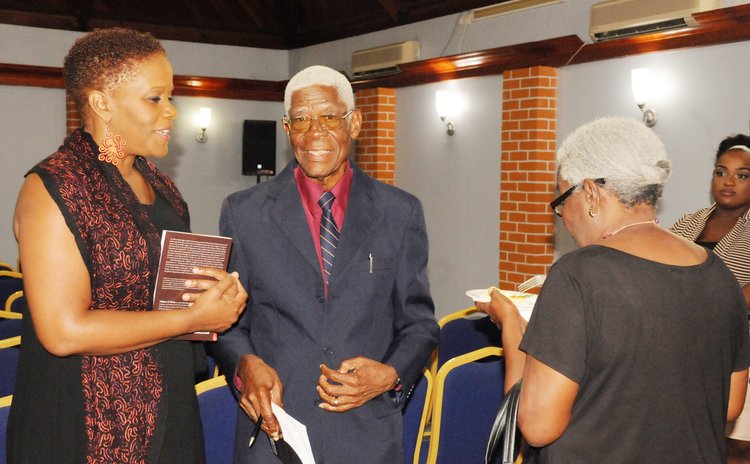 Rev. Dr. Watty, centre at his book launch at the Fort Young Hotel

On Wednesday last week about 50 people attended the launch of the book: 'The Nathan Narrative in 2 Samuel 7:1-17, A Traditio-Historical Study' at the Fort Young Hotel in Roseau, Dominica.

After an hour-long address on the making, meaning and significance of the book by the author, retired Methodist minister and lecturer, Reverend Dr. William Watty, few people in the audience had questions or comments.

Maybe Rev. Watty was so eloquent, so thorough that comments and questions evaporated. Or, most probable, the subject itself was too deep, a dish prepared only to be savored by professors of religion.

In fact the book, 214 pages, seven chapters- is a revision of the doctoral thesis that Rev Watty presented to the Department of Theology in the Faculty of Humanities and Education of the University of the West Indies. Firstly, we would assume that the religiously under-schooled would want to know, who really was that "dude" Nathan and what did he say in Samuel 7?

In a simplified summary of 2 Samuels 7:1-17 we learn from the website scmoop.com that:

"David feels a little awkward since he's living in a nice house made of fine cedar wood, but God's Ark is just roughing it in a tent. He suggests maybe building a temple to the prophet Nathan—and Nathan says David should do what he thinks best.

"But that night, God's voice speaks to Nathan and tells him that he actually hasn't had a problem living in a tent all these years. God reminds Nathan that he's never asked any of the former tribal leaders of Israel to build him a temple—and he won't ask David, either.

"Instead, God tells Nathan to give this message to David: God is in David's corner, protecting him and helping him do everything he's doing, blessing him. "There will come a time, says God, when he will have a temple built—but, it will be once David has died.

"One of David's kids is going to build the temple: he'll be a good king, and won't lose God's favor—but, when he screws up, God will correct him with human violence. Also, David's successors will ultimately endure and rule forever.

"Nathan successfully relays all this info to David".

Of course, Dr. Watty's book on the Nathan Narrative in the Old Testament is much more intricate; it is really an intellectual journey into the intricacies of that story in the Bible. And Rev Watty believes the book's publication is indeed historical.

"As far as I know, this is the first indigenous contribution from this region to the study of the Old Testament at a scholarly level and if I'm correct, I believe that this is a historic moment for the church in the Caribbean and as a proud Dominican it is a big moment for Dominica," Rev. Watty said. "I'm happy to launch this book and I pray that it will find acceptance here, it will find acceptance abroad and that in time to come, we will say that we've made our contribution, as we have done in other areas, to the word of God".