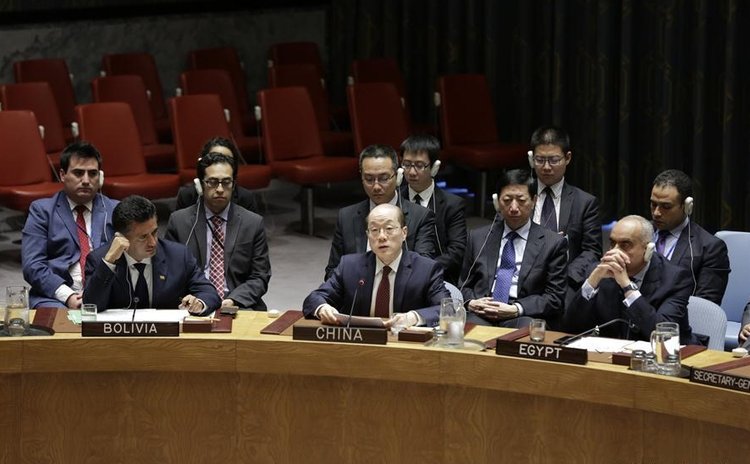 At the United Nations during the North Korea vote

UNITED NATIONS, Sept. 11 (Xinhua) -- Citing threats to not only Northeast Asia but the whole world, members of the UN Security Council on Monday ratcheted up, yet again, sanctions on the Democratic People's Republic of Korea (DPRK) for its most recent nuclear test.

The new sanctions severely restrict oil imports, and ban all its textile exports worth 800 million U.S. dollars and remittances of some 93,000 DPRK laborers from abroad.

Speaking after a unanimous vote on the resolution that passed the sanctions, several ambassadors said the severity of the sanctions was designed not so much as to hurt the DPRK but help it see negotiations are only way out of the Korean Peninsula nuclear crisis.

"The situation on the Korean Peninsula remains complex and grave. All relevant parties must be cool-headed and avoid rhetoric or action that might aggravate tension," Chinese Ambassador Liu Jieyi said.

He urged the DPRK to heed the aspirations and will of the international community, abide by relevant Security Council resolutions, refrain from any more missile launches or nuclear tests, and return to the track of denuclearization.

Liu said Monday's resolution also reiterated the maintenance of peace and security of the Korean Peninsula and Northeast Asia and the peaceful settlement of the issue, the resumption of the six-party talks involving China, DPRK, Japan, Russia, South Korea and the United States, and the importance of de-escalating tension on the Korean Peninsula.

"Today's resolution reduces almost 30 percent of oil provided to North Korea (DPRK) by cutting off over 55 percent of its gas, diesel, and heavy fuel oil," the Washington envoy said. "Further, today's resolution completely bans natural gas and other oil by-products that could be used as substitutes for the reduced petroleum. This will cut deep."

South Korea is not a member of the UN Security Council. Cho was invited by the council to speak as his country is an important stakeholder of the crisis.

"The resolution also sends a clear message to Pyongyang that enough is enough. Continuing on the wrong path will only deepen its isolation, seriously endanger its political stability, and hinder its economic development," Cho told the council.

"Our goal is not to bring North Korea (DPRK) to its knees, but to achieve a peaceful solution," Cho said.

Japanese Ambassador Koro Bessho said: "If North Korea (DPRK) wants peace and security it needs to demonstrate concrete measures for the denuclearization of the Korean Peninsula, comply fully with the relevant Security Council resolutions and joint statement of the six-party talks and thus come back to the dialogue table."

Ambassador Sebastiano Cardi of Italy said the restrictive measures are a reflection of the gravity of the current situation, and they constitute "a proportional and appropriate response."

He called on the DPRK to immediately cease all nuclear and missile-related activities, making credible progress in its obligation to denuclearize and opening the way for a peaceful solution through meaningful negotiations.