JUMP BALL No. XXIII : A peek at local basketball then and now. By Arlington James 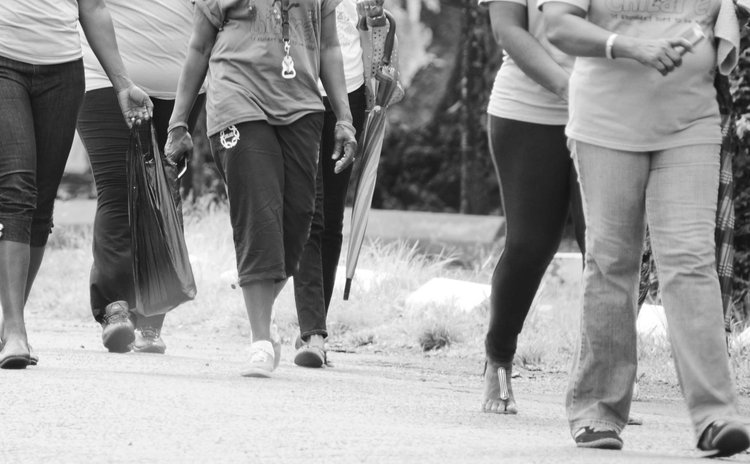 Walkers at a later event

Have you ever participated in or supported a fund-raising event? A cake sale, tea party, talent show, raffle, car-wash or a dance? Or maybe a barbecue, a jumble sale or a radio-thon? Or even soliciting funds using a "sponsor-sheet"?

Walking is considered a very healthy exercise, and walking races even feature on the calendar of athletics events in some Caribbean countries. In Dominica you may have walked/hiked relatively long distances, e.g. Segment 8 of the Waitukubuli National Trail, or from Pottersville to Boiling Lake and back, all for fun.

But have you ever participated in a "Belle Marcher"? Either as a pre-schooler, or as a primary or secondary school student? Or even as a member of a youth group, sports club or service organisation, trying to raise funds for this purpose or for that cause.

If you played basketball in the 1970s, you would probably have heard someone comment, "Bél Maché Pon-Kasé" when a referee would blow a "walking" (travelling) violation.

But how many Dominicans know the origin of "Belle Marche"?

"Belle Marche" has been in Dominica's English-Kwéyòl vocabulary for just under fifty years now, when the then Basketball Sub-Committee of the Dominica Amateur Sports Association, in an effort to raise funds to send the State's Basketball Team on a tour to Guadeloupe, St. Kitts and Antigua organised a major fund-raising event.

Over the next ten weeks, three more articles about that venture, which was patterned on a fund-raising walk previously held in England, were published in the Chronicle; two were illustrated with photographs.

The English walk-a-thon was an effort to raise funds to help the homeless; was 35 miles long (London to Windsor); was conducted entirely by schoolboys; and the 100 plus finishers from the 142 starters raised over $14,400.

Our first Belle Marcher: On Sunday 18th May 1969, after weeks of planning and registration by intended participants, starting from Victoria Street outside of the Public Library approximately 430 walkers of varying ages and walks of life, including students, basketballers and others set off on a gruelling but fun-filled 28-mile course.

The route took the walkers (and runners) along the West Coast Road to the Hillsborough Bridge at Layou, up the Layou Valley Road to Pont Cassé, down to Canefield, and ending at the St. Mary's Academy in Roseau.

The walk (BMPC), in which the Governor started, and the Mayor completed the first mile to Fond Colé, was completed by 163 persons, comprising 89 males and 74 females. Approximately 280 of the participants were sponsored.

That Dominica Chronicle story of 24th May 1969 stated further that the first three finishers, viz. Hayden Smith of Cardinals, William Bellot of D.G.S. and Ferdinand Azille of S.M.A., all of whom were "looking quite unfagged and ready for another walk", completed the Walk in just 6½ hours. The final set of stragglers, on the other hand, limped in at about 7:30 p.m., some chaffed, others with scorched and blistered feet.

Initially the organisers expected "over $1,000" to have been netted if sponsors played their part. However, Belle Marcher Pont Casse actually netted a handsome $2,300, with Convent High School girls alone contributing $1,000 of that amount. One of the C.H.S. girls raised $45 and was awarded the Belfast Estate Prize.

It must also be noted that BMPC was very well supported, from the State's Governor and the city's Mayor down to the "ordinary man in the street", and the Basketball Fraternity must have been grateful to the students of Convent High School in particular who went all out to face up to the challenge.

Following on the success of Belle Marcher Pont Cassé, the netballers and netball administrators of the day were discussing staging a similar event, along the same route, in November 1969. This was in order to raise funds to send Dominica's Netball Team to Jamaica for the 1970 World Netball Championships.

Since May 1969, there have been scores of other fund-raising walks all over Dominica, most being referred to simply as a Belle Marché. The Nehemiah Comprehensive School held annual Walk-A-Thons to raise funds for the school. For instance in 2011 the students journeyed from the school compound at Gimmit to Canefield, up to Cochrane, across to Middleham Falls, then down to Roseau via the Roseau Valley Road. However, the school did not borrow that Belle Marcher name for their Challenge-Walks.

Some of the participants in the inaugural Bèl Marché must now be in their 60s and 70s, and Jump Ball wonders how many still do any substantive amount of walking.

N.B. The first of the two photographs referred to above appeared in the press on 10th May and was captioned, "Oliver Grell Does a Massage Job on his Blisters After a Training Walk for the "Belle Marcher". The other photo also appeared in Dominica Chronicle, but on 24th May, and was simply entitled, "Belle Marcher Group at Starting Point".