Cecil Joseph, manager of the stated-owned radio station, said the other option was to send staff home as advertising revenue plunge after Hurricane Maria 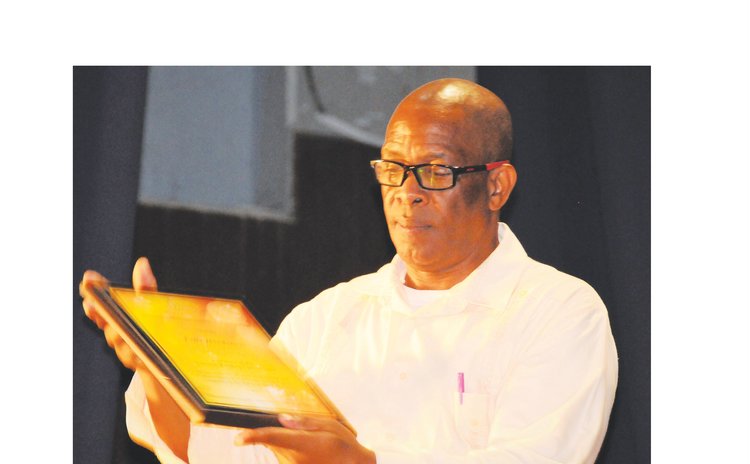 Joseph at the DBS Reading Competition in 2017

Cecil Joseph, the manager of the State-owned Dominica Broadcasting Corporation (DBS radio) refutes rumours that the radio station is being mismanaged after he was forced to reduce salaries of staff after Hurricane Maria.

Speaking to the SUN in an exclusive interview, Joseph said: "I have nothing to hide. We took the wise and prudent decision not to send staff home and instead opting for a pay cut but we have since remedied the situation".

Like many other institutions, DBS radio was impacted by Hurricane Maria which left widespread destruction and death in Dominica on September 18, 2017.

Joseph said that after ensuring that his staff received necessary assistance after the storm, he was saddled with having to deal with an acute financial situation at DBS since advertizing had reached "rock bottom."

"I had a meeting with my heads of department and informed them that based on how I see the country, it's going to take some time before we come to normalcy and that every head, one way or the other, should put together a structure in regards to the management of staff. I also informed them that no staff member will be sent home or fired based on the situation", he said.

He continued: "I was concerned about our finances…we saw what our finances were like at the end of September. I then went in October to ask the managers to cut the hours of staff so as to minimize cost. Remember we were under pressure since the September figures were not good but I was clear in my mind I was not going to send them home. They got 100 percent salary for September on the 5or 6 of November. We were running at an overdraft.

"I then went to seek help of the Prime Minister and Minister of Finance to assist us. We got that money on November 25th. We had to pay our trade payables plus VAT. So the decision was manager's salary was cut by 35% which included allowances. I was on console and had to work long hours. Other manager's salaries were cut by 25% other staff including news desk and announcers 30%, others 15%," he said.

Joseph lashed out at staff whom he accused of spreading "rumours".

"This is good management…I said to them 'thank you for the understanding for the month and I hope whatever we did as management will erase any doubts in your mind'".

Joseph says that anyone who says that he did not treat the staff well is "dishonest, wicked and lying."

"We had to pay DOMLEC, FLOW and all, plus we had diesel to pay, over $14,000. Salary for October, November and December at DBS amounted to $ 193,310. I could have done like many other places and sent home staff but I chose not to since I have a human heart," Joseph said.

DBS has a staff compliment of 28.