She is vibrant. She is animated. And her love for music and culture is no secret By Gwen Evelyn 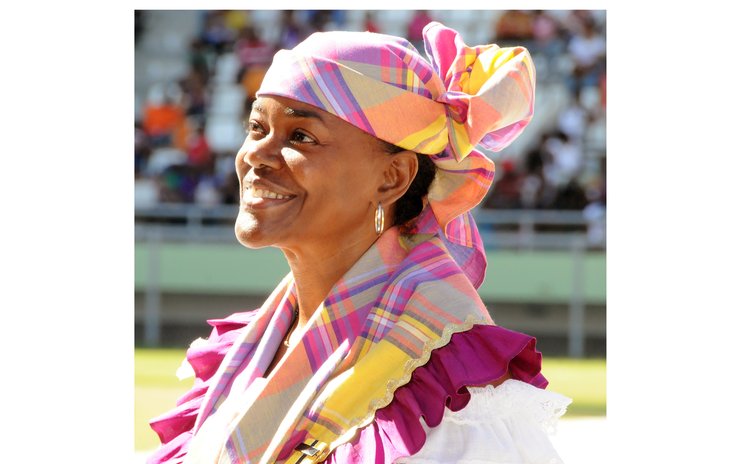 Pearle Christian, widely known as Aunty Pearle, has imparted her skills and knowledge to numerous Dominicans in the form of her exceptional musical skills.

She has also done the same for many years on a national level rising from the position of assistant cultural officer to senior cultural officer at the Cultural Division from 1981 until her retirement in 2015.

A trained flautist, Pearle enjoys teaching the flute and recorder to young children and teens. But she confessed to an ulterior motive. She wants to do more than just teach; she sees teaching as a vehicle to build character and instill wholesome values in her students.

Pearle thinks of her students as her children. Since retiring, she has focused on teaching music at her private studio – Henckel Muriel Music Workshop.

Her extensive knowledge of music came from the Jamaica School of Music. She treasures her exposure there, where she earned a Diploma in Music Education and also worked for one year.

"It was at a time when the Caribbean was trying to find an artistic voice to be a force to contend with on the world scene...." she recalled.

On returning home, an important aspect of Pearle's duties at the Cultural Division was to generate positive movement in the local music environment.

The musicals were performed by her Kairi School of Music Choir, which was in full swing at that time.

Pearle also collaborated in the compilation of a collection of Caribbean folk songs composed for classroom instruments.

She said, "It really…gave me the opportunity to do things I have a passion for: teaching music . . . using folk culture as inspiration for creative, contemporary material . . . musicals. . . folk songs. . . choirs . . . flute ensembles…all my instrumentals. I use folk music to create material…"

While she was at the Cultural Division in 1994, she spearheaded the formation of the Sixth Form Sisserou Singers after a request from students who had participated in a workshop she taught.

Pearle continues to serve as director for the group, which stages an annual production that includes Caribbean folk material.

"I just have this passion for choral music and working with young people… to oversee their development. That is what really kept me going….just being excited about potential.

"You see the potential in these young people and you just try to guide them in their areas of strength…" she said.

"For me, it was way more than choral music; [it is] a vehicle for the development of the young persons in that group…" she asserted.

She uses her work with the group to instill in her young students an appreciation for refined material and the ability to work tirelessly to achieve excellence.

Recalling the late Premier E.O. Leblanc's passion for culture, Pearle said she thinks the Cultural Division has been living up to its role as it continues to nurture choirs, choral speech, dance and drama.

She acknowledged that culture will evolve with time, but emphasized the need to retain the core of traditional music to ensure its authenticity and longevity.

"You have to find to find ways of preserving that form. If you just let it go, it will just keep evolving," Pearle explained.

Elaborating, she said traditional dances were once done for dancers' personal entertainment, but when they were performed on stage, adjustments were made for audiences' entertainment.

Giving an example of a change in tradition, Pearle noted that PVC pipes have largely replaced bamboo in Jing-ping music, which today is far louder than before.

Remarking on the confusion between traditional Creole and indigenous Kalinago cultures, Pearle said the two are not interchangeable.

She expressed concern that, in some cases, the term 'Creole' is expanded to include facets of Caribbean culture outside the original traditional Francophone forms in Dominica.

As an example, she cited Dominica's World Creole Music Festival, which includes performances by Soca and Reggae artistes.

"It's wonderful, it's beautiful. I love that whole mix. But it does not serve the purpose of the Independence season.

Pearle added that there are many other cultural aspects that are now part of Independence celebrations, which depart from Dominica's traditional culture.

She contends that one surefire way of ensuring the survival of the island's traditional culture is to teach it in schools.

As she sees it, the importance attached to traditional culture in schools depends on individual principals and teachers.

Dominica honoured Pearle with a Meritorious Service Award in 2008 and a Golden Drum Award in 2016. And in 2010, LIME presented her with a Lifetime Achievement Award. These are just of the awards she has received in her illustrious career.