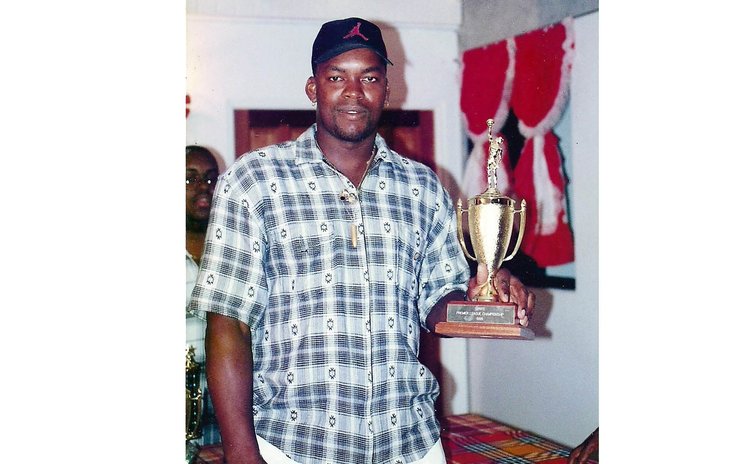 We are all familiar with the quote, "Death sometimes comes like a thief in the night", and from time to time this is manifested among Dominica's basketball fraternity.

Some of the local basketballers who have gone to the Great Beyond over the years had already retired from the sport, the most prominent among them being Pierre Charles - a member of Pros who later served as Dominica's Prime Minister.

At the other end of the court, some of the basketballers who passed on were still actively involved in the game, either as players or as coaches, making their contribution to the development of the sport at the community or national level.

Below are brief profiles of those who "Bazil" subbed too soon and were taken off the court prematurely.

Floyd Andrew played basketball with Cowboyz of Soufriere in the top Division of the national league.

Shortly before Carnival in February 2005, Floyd collapsed on the basketball court at Soufriere – his home village - while "taking a sweat"; he never recovered.

Stephen "Homo" Bellot, who played Guard, was a prominent member of Grand Bay's Pros in the 1980s and 1990s; he also represented Dominica on the Senior National Basketball Team.

At the time of his passing in 2012, Homo was a member of Sweat Beggars in Grand Bay's League. Moreover, he helped train several young basketballers from Grand Bay.

Julius "Boss Boy" Cuffy: You would often hear it said around the Windsor Park Hard Court in the 1970s and 1980s, "Nobody can bounce a ball harder than Boss Boy". Arguably, others claim Carlton "Carlty" Bernard – also deceased. Those who played with those two players can testify accordingly.

However, Julius' extra-hard bouncing of the basketball while dribbling was his signature trademarks as a Point Guard.

"Boss Boy" first played with Lamb's Bread in the Junior Division, followed by Wizards, then Killer Bees, in Division I. He was also a member of Dominica's National Basketball Team before passing away in 1990.

Johnny Daniel of Vieille Case was a regular high-scorer on the Police Sports Club team, which had moved from playing Intermediate Division basketball up to Division I.

In 1992, while playing a Division I match against Cardinals, Johnny sustained a head injury while attempting to inbound the ball after a Cardinals basket. Later that night he passed away at his home as a result of that injury.

Glen "Glee" Jno. Baptiste was a native of Mahaut who first played in the national league with Mahaut Spartans, followed by Knicks in the Premier Division; he then returned to Mahaut Spartans after Knicks closed shop in 2007.

At the time of his passing in August 2014, he was a member of Sick-U-Sick Spartans Ballerz United, a team from Gutter/Goodwill that played in the league's 2nd level Division.

Wilson "Willo" Languedoc, who was described as a "3-Point Specialist", played basketball with St. Joseph's Hurricanes in the 2nd level men's division for a few years. He also played in La Plaine's Basketball League.

"Willo" had begun coaching Hurricanes in the national league before he passed away in 2016.

Milton Paul made his basketball debuts in Division III and in the Under-16 Division in 1988 with Hoyas. He later became a founding member of Knicks, with whom he played for the duration of their 13-year lifespan, assisting them capture their 5 Premier Division championships. Thereafter he played with X-Men. He also officiated in the national league.

Milton, playing as a Centre, was also a member of the National Team for several years, captaining the team on occasion.

At the time of his passing in 2014, Milton was Assistant Coach of X-Men in the Premier Division.

Marcus Warner had played competitive basketball with (Portsmouth) Raiders from the mid-1990s until recently. Initially he played Point Guard in the League's top Division.

Marcus passed away in St. Maarten around 2014.

Augustus "Tuss" Williams formed, played with, and coached Lions, until they expired in 1988.

He then coached Reefs in Division III, from 1989.

Moreover, "Tuss" served as a senior referee and on the Executive of the Dominica Amateur Basketball Association. He passed away in April 1991.

RIP: The eleven individuals presented above all played basketball in the national league, albeit at different levels. Three represented Dominica, three coached, and two officiated. May they all continue to Rest In Eternal Peace.