What is Sargasso Seaweed 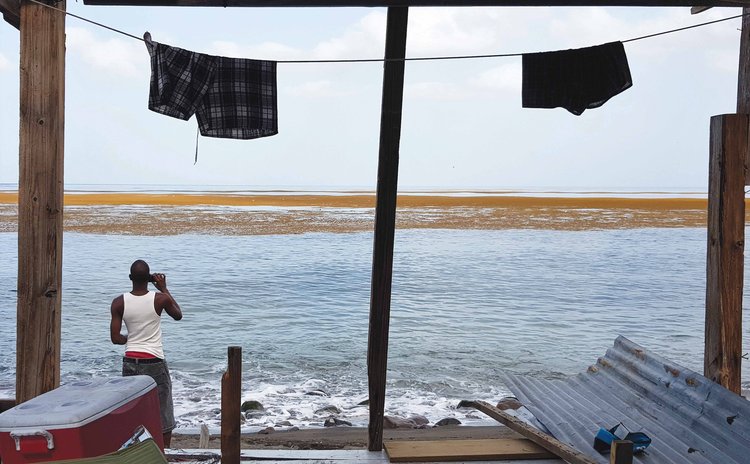 For several years now, I have witnessed an increase in this brown seaweed with its berry-like clusters. Research into this has been impressive as to this "strange brown mass" which seems to invade our coastal waters.

Sargasso seaweed (Sargassum) is marine algae that are so abundant in the ocean that it now "clogs" several of our coastal and fishing areas around Dominica and neighboring islands. This seaweed generally occupies a large area in the Atlantic Ocean about the size of the Continent of Europe.

Interestingly though, if you look closely at a sample of the seaweed, it is easy to see the many leafy appendages, branches, and round, berry-like, structures that make up the plant. These "berries" are called pneumatocysts, which are filled mostly with oxygen. The oxygen-filled pneumatocysts are part of the plant structure that helps it to float on the water surface. A floating mass of Sargasso seaweed can stretch for miles across the ocean. These large masses provide food, protection, and breeding grounds for several marine species such as fishes, sea turtles, marine birds, crabs, shrimp, and others. Sargassum is a primary nursery area for a variety of commercially important fishes (NOAA Ocean Explorer, 2018).

When Sargasso seaweed loses its ability to float, it sinks to the seafloor and provides energy, in the form of carbon, to fishes and invertebrates in the deep sea. Sargassum has potential to contribute to the food sources deep in the ocean (NOAA Ocean Explorer, 2018).

In 2005, scientists used a type of net called a neuston net to sample surface waters in the Gulf of Mexico. In towing the net for only one 15-minute period within an area of Sargassum, they collected over 3,000 fish in 180 pounds of Sargasso seaweed (NOAA Ocean Explorer, 2018). It proves the point of the ecological value of Sargasso seaweed to marine species.

Because of its ecological importance, Sargasso seaweed has been classified as Essential Fish

Sargasso seaweed also helps protect beaches from erosion. Research continues on the possible use of this seaweed such as an organic fertilizer for farming, material for soil composting, and others.

As World Oceans Day was recognized, internationally, on June 8, 2018, let us take some time from our busy schedule to learn and appreciate more about the ocean and marine resources.