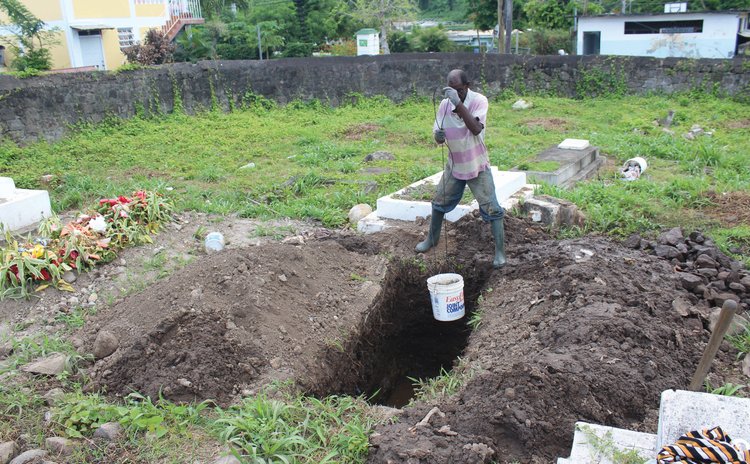 As a grave digger for 13 years, Clayton Hector knows better than most how difficult it is to find space to bury the dead; how challenging it is for families of the faithfully departed to have peace of mind that their loved ones will have an appropriate spot for their eternal rest.

Hector is particularly familiar with the situation in the capital, Roseau, where the already limited confines of both the Roman Catholic and public cemeteries are being shrunk by rising waters and growing shrubbery.

"I know the area, it's my life," a passionate Hector tells The Sun.

He also knows where to dig, he says. But even then, digging often results in some uncomfortable discoveries.

"Some people dig and find bodies which are not properly decomposed, and that is an issue especially since the tombs are not marked," Hector reveals. "People are also making noise not wanting us to bury their loved ones in the waterlogged area and we have such [water] in the Catholic cemetery and also the public cemetery.

"The public cemetery always has lots of grass which always needs clearing. The Catholic cemetery is not bad, the space is reasonable, you just have to know where to look to dig."

The problems posed by inadequate burial grounds are nothing new, as identified in a survey conducted by then chief physical planner, Raphael Francis, several years ago.

The date of the survey is not immediately clear, but Anthony Scotland, the chief environmental health officer, referred to it in July 2014 when he spoke of the "lack of burial space" at the Massacre cemetery and the domino effect it was having on surrounding communities.

"He has a lot of good recommendations," Scotland said at the time without elaborating.

But he also indicated then that "we are still faced with the space issue and Massacre burial ground is almost filled". Therefore, he said, the ministry of communications and works would pursue the opening of a cemetery in Mahaut before closing the Massacre cemetery, with plans to revisit it "after a couple of years".

Four years later, the now retired Scotland is still talking about getting the Mahaur cemetery fully operational to "ease up the strain" on the burial grounds in Roseau. "The infiltration of the water in the public cemetery and also into parts of the Catholic cemetery in Roseau all stems from the Roseau River and is a major issue because when graves are dug water is now rising up, so a survey needs to be done to deal with this problem," he tells The Sun.

Scotland again floats the idea of cremation, a practice that is growing in popularity in countries like Barbados, where traditional burials are losing ground, partly because cremation is less costly.

"Given what is going on we need a crematory in Dominica which is an alternative to burial. What we need is to set a standard for the crematory so people can use it," he recommends. Globally, the average cost of cremation is one-third that of a burial. Scotland also proposes the use of family plots for interments, as long as the environmental health department certifies the plot and records are kept "of all where you bury people in a cemetery since you have seven years before digging".

"I went to a funeral in Massacre and the grave was fresh. All the body parts was available and not decomposed."

In his report Francis had pointed to the obvious "serious shortage of land space" for interment, "more pronounced" in Roseau, Massacre, St. Joseph, Pointe Michel, Colihaut, and to some extent, Coulibishie, along the west coast, along with Portsmouth, La Plaine and Grand Bay.

"The problem of Roseau is most critical and needs to be dealt with immediately. Besides the settlements within its zone of influence with a total population of approximately 20,000 in recent times since 2003 Roseau has had to deal with a further 6,000 population of Mahaut, Massacre and Canefield areas. The resolution of the problem of the City of Roseau rest with the immediate establishment of cemeteries to serve the village of Mahaut, particularly with the imminent closure of the Massacre cemetery and the Canefield area," he said.

Francis had also recommended that church and local authorities develop a tracer or marking system to guard against graves being dug prior to the seven years prescribed in the regulations and to enable maximum utilisation of space, particularly in cemeteries under stress.