From a Prophetic Perspective: The Goose that Laid the Golden Eggs - a Modern Day Fairy Tale 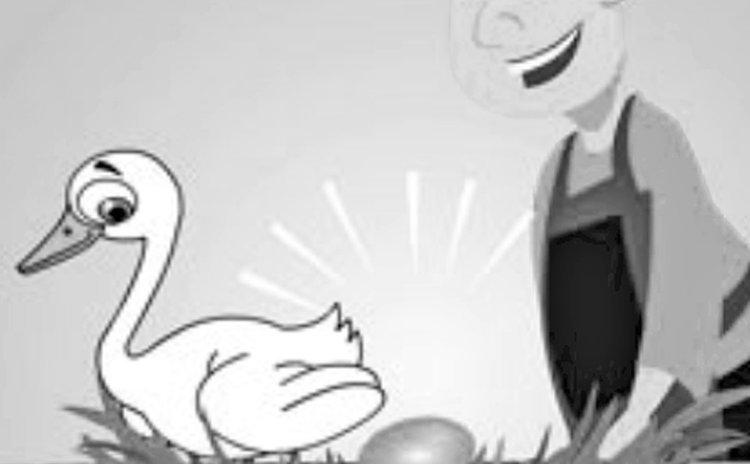 Once upon a time in the region of the sunny western isles, lay a beautiful, mountainous island known as the Kingdom of Kubuli. There came a day when suddenly, out of the blue, from the realm of the Great North, a strange bird came flying into the kingdom.

It appeared at first from a distance to be an albatross, but it actually was a goose. After temporarily resting in the south of the Kingdom it found a permanent nesting site to the north in which it began to lay golden eggs.

The Lords of the Land were astonished at this fabulous find. They wasted no time in negotiating with the Goose. In return for supplies of her golden eggs, they would enhance the ambience of her nest by providing all requisite amenities. From the Royal Councilor over the affairs of the North, Yan of the Last Dog Dynasty, came the assurance of protection from would be golden egg predators, security for the Goose and enhancement of her surrounding environment, as well as any other favour on assistance she so required.

Soon, in time to come, the mutual benefits were very evident for both the Goose and the Lords of the Land. The Goose became very huge and fat and profusely increased her laying of golden eggs. The infrastructure of her nesting place was also dramatically transformed and enlarged to accommodate her proliferating brood of hatchlings.

The Lords themselves became very rich. A few, seemingly filthy rich! Many of them acquired properties through loans which they paid with golden eggs to their creditors. The era of the Goose greatly boosted the economy of the part of the Kingdom and to some extent the Kingdom's overall economy. Eventually the growth and development of the North revolved almost entirely around the Goose and her golden eggs. But the golden era wasn't so glittering for everyone. For a common lament was heard throughout the Kingdom. It was about the greed that was evoked with the arrival of the Goose, manifested in the ludicrously high prices of land, properties and rent that was now beyond the reach of most royal subjects.

Nevertheless, for many who benefited from this golden 'eggorama', life could not have been better. The reigning monarch, His Imperial Majesty King Rooz II, as his predecessors had done, ensured that everything was done to keep the Goose on the Kingdom of Kubuli. Of course it never occurred to His Majesty, neither Councilor Yan nor the Lords of the Land or any of the Royal Subjects, that they were unwittingly putting all their golden eggs in one basket. After all the goose was here to stay happily forever after.

But one fateful day, a catastrophic turn of events came about when ill winds of incredible magnitude ravaged the Kingdom of Kubuli from one end to the next. In that terrible disaster many subjects lost their lives and many homes and properties were severely damaged or destroyed. The nesting site of the Goose was significantly impacted. Soon after she and her goslings flew away temporarily out of the Kingdom. At that time she honked that they would return and re-nest after taking some time off from the chaotic situation.

However shortly after her departure great uncertainty among the subjects of the North was spreading due to rumors that were rife about a permanent departure of the Goose and the eminent demise of the golden egg boom. But those rumors were vehemently dismissed by Royal Councilor Yan of the Last Dog Dynasty. He assured the worrisome Lords of the Goose's certain return shortly.

But sad to say the rumors proved to be true. While away from Kubuli, the Goose was prospecting for an optional nesting site and found a choice one on the Kingdom of Bim. She honked in an announcement to the Royal Court and subjects of Kubuli that she regretfully was moving to that neighboring kingdom due to much better nesting conditions there. She further honked about incentives from the Queen of Bim that guaranteed her far greater returns on her golden eggs than was obtained in Kubuli.

Back on the beleaguered mountainous Kingdom, the fallout over the Goose's departure was, to say the least, uproarious. Much ranting and raving and weeping and gnashing of teeth was the order of the day as opposing factions blamed each other for this now calamitous state of affairs.

Nevertheless, suffice it to say, the Queen of Bim and her royal subjects were now basking in a new golden egg era with the advent of the Goose for whom the future now lied in her newly found nesting habitat.

And on the Kingdom of Kubuli? Well, up to the time this tale was published the controversy is seemingly forever without end.