Worst mass shooting in US history. Obama says it was an act of terror and hate 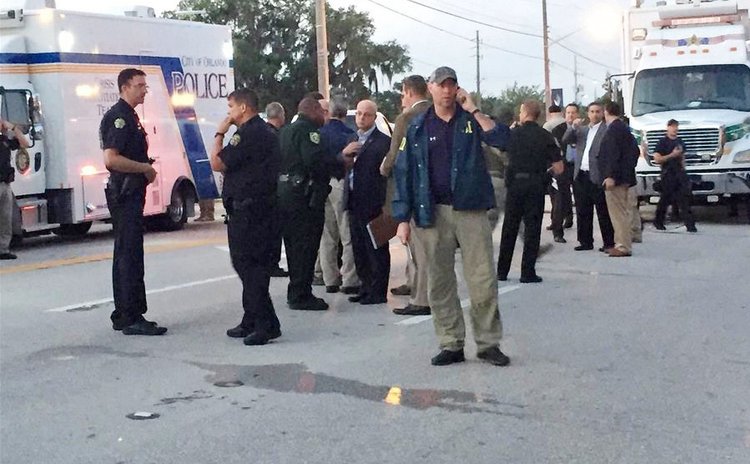 Photo provided by Orlando Police Department shows police officers at the site of the shooting incident in Orlando, Florida, the United States, June 12, 2016.

WASHINGTON, June 12 (Xinhua) -- U.S. authorities are trying to determine the mass shooting at a gay nightclub in Orlando, Florida early Sunday is a terrorist act or hate crime.

Fifty people were killed and 53 others wounded early Sunday in the shooting at a gay nightclub in Orlando, Florida, Orlando Mayor Buddy Dyer told a news conference.

"Today we're dealing with something that we never imagined and is unimaginable," Dyer said.

The gunman, identified as Omar Mateen of Port St. Lucie, Florida, was found dead inside the Pulse nightclub after a shootout with the police, according to Orlando Police Chief John Mina.

"It appeared he was organized and well-prepared," said Mina at a earlier press conference, adding that the suspect had an assault-type weapon and a handgun.

Danny Banks, a spokesman for the Federal Bureau of Investigation (FBI), said that the shooting, the deadliest in a single shooting in the U.S. history, was being investigated as an act of terrorism.

Ronald Hopper, an assistant FBI agent in charge, said the authorities now had "suggestions that the individual may have leanings toward" ideology held by the Islamic State (IS) extremist group.

But he added that "right now we can't say definitively."

Reports said the parents of Mateen, a 29-year-old U.S.-born citizen, were from Afghanistan.

ABC News quoted U.S. law enforcement officials as saying that Mateen was "on the radar" of U.S. officials for some time, but he was not the target of a specific investigation.

U.S. President Barack Obama was briefed by his homeland security and counterterrorism advisor Lisa Monaco on the tragic shooting, the White House said in a statement.

Gun violence in the United States has in recent years grabbed headlines nationwide and worldwide, especially such cases as the Sandy Hook shooting in 2012 in Connecticut, in which 20-year-old Adam Lanza entered an elementary school and fatally shot 20 children as well as six adult staff members.

Additionally, the United States has seen a number of cases of multi-victim shootings, such as a mass shooting in Aurora, Colorado in 2012. A gunman entered a movie theater and murdered 12 people and injured 70 others.

But despite these and other incidents, powerful gun lobbying groups such as the National Rifle Association (NRA) have successively blocked Congress to pass any bills to curb gun rights.

So far gun violence has not been a major political issue during this election season. It remains unknown if the latest shooting will ignite heated debate on gun violence among the presidential candidates.

The NRA has endorsed Republican nominee Donald Trump, who attacked his Democratic rival Hillary Clinton for trying to curb the gun rights of U.S. citizens endowed by the Constitution.

Meanwhile, IS radicals are calling on followers to hit the United States and Europe during the Muslim holy month of Ramadan, which starts last week.

In a recording released online in later May, IS spokesman Abu Mohammed al-Adnani called for launching further terror attacks against Western targets.

U.S. authorities have been on high alert against terror attacks since the shooting last December in San Bernadino, California, where an armed radicalized couple killed 14 people in an act of terrorism.

Indeed, U.S. intelligence and police leaders have always warned about the danger of "lone wolf" attacks in the United States by terror groups or radicalized individuals.

James Clapper, director of U.S. National Intelligence, warned at a Senate hearing in February that IS is the U.S. "number one terrorist threat," as it was attempting to launch direct attacks on the U.S. homeland in 2016.