Soon, it will be:Bar of Females Only 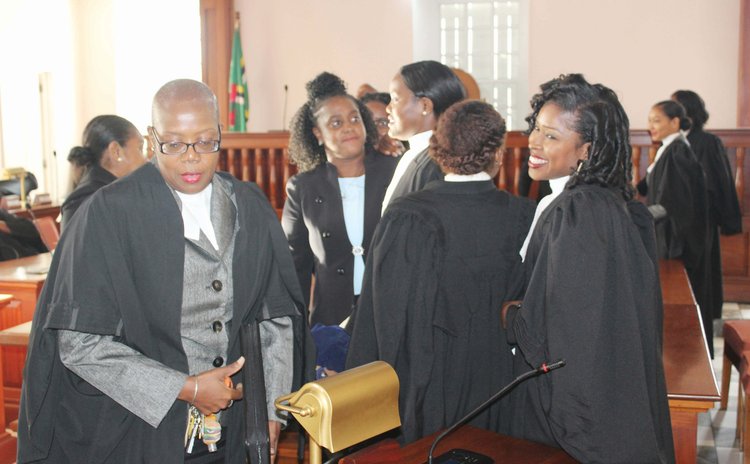 Mary Roberts , president of the Dominica Bar Association, and other female lawyers at the High Court

Men, don't panic but women have virtually overtaken another bastion of male dominance- the legal system.

That fact was made starkly obvious last week when four women-Daina Matthew, Nadia Lando, Jodi Luke and Pearlisa Morvan- and one man, Kael London- were called to the Dominica Bar. On Tuesday another female dons her lawyerly robe for the first time.

"When I perused the list and I realized that Kael London was onboard it was somewhat a breath of fresh air since the profession has been engulfed by women," Williams said adding that that was not a bad thing as such. "Hurricane Maria exposed Dominica in a big way…and it forced me into self-examination and realized that we in a crisis situation."

Williams, speaking at the court session at the House of Assembly building, continued: "Our men were no longer pursuing the academic route and at the same time they were not even going into the technical field. To see a man now coming as a lawyer at this time when our men have been distracted and embraced idealness as a way out is indeed highly commendable".

"My Lady, it's sad to say, that our men have not only become unemployed but unemployable," Williams said addressing the female Judge. By the way there are two judges in Dominica- both are female.

Meantime, Mary Roberts, President of the Dominica Bar Association said: "The ascendancy of women is not unique to the law profession. If you start at persons sitting their common entrance exams, we see that the female population is more," she said. "We also see that women are excelling and we have to ask ourselves as adults in the society and as parents that our responsibility for the male seems to be failing.