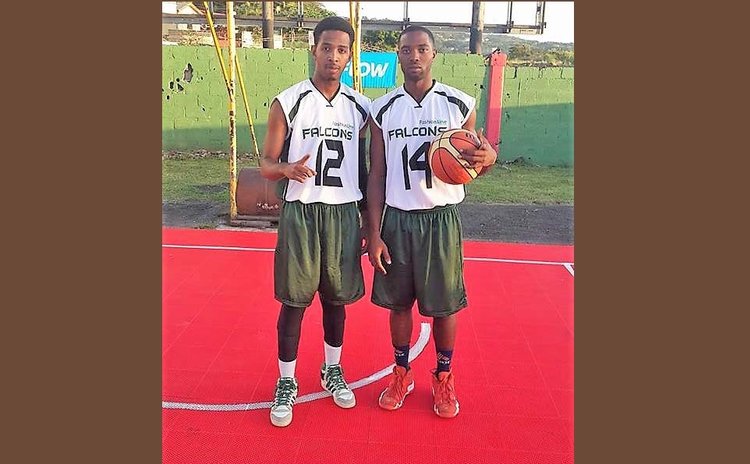 Part IV of Pichelin's Basketball Culture presented on Pichelin's players who participated in Digicel Jumpstart, in Under-20 and "Inter-Schools" Basketball, on the National Under-23 team, Young Falcons Under-17 Team, Pichelin's basketball league, basketball facility, and Pichelin teams participating in other community leagues.

Sponsors of Pichelin Basketball: Teams from Pichelin which have participated in the national league have received sponsorship assistance from four companies to date and, as we know, charity begins at home. All of those sponsors to date have some direct or indirect connection to the community.

Grabbing the first possession was D-Supply & Tyre Store, which is based in Roseau but which had Walter Desabaye (deceased) – a son of the soil from Pichelin - as proprietor. That sponsor-team relationship began in the 1990s when D-Supply PACERS debuted on the court.

Walter's son, Joel, recently picked up from where his Dad left off and continues the display of generosity through another family business, R & C Auto Ltd. The latter are the sponsor of R & C Auto FALCONS that participated in DABA's Business League which first bounced off in 2018.

Bull's Eye Pharmacy sponsored Bulls Eye PISTONS when the latter participated in the Grand Bay Basketball League, as well as in the DABA national league until 2011. For the records, the wife of the pharmacy's proprietor hails from Pichelin.

FashionLine Store, which was owned by Kelvin Pacquette of Pichelin, was the main sponsor of both FashionLine FALCONS Premier and Division I teams in the national league. That connection lasted from 2012 up until 2017 when the store was destroyed by Hurricane Maria.

On behalf of those five teams, Jump Ball wishes to say a big "Thank You" to all sponsors for your generosity. You have played a major part in making Pichelin's basketball teams the pride of their community.

Sherwin, however, was also an outstanding Track & Field athlete and was considered "among the best on the U.S. college Track and Field scene" in 1999. His greatest achievement as an athlete is making it on the IAAF (International Association of Athletics Federations) World Indoor List in the 60m sprint, in 2004.

Greg Letang (D-Supply Pacers) is a Soca artiste; he competed in the 2011 Soca Monarch competition under the stage name, "2 Greedy".

Yawani Régis (Falcons DI) represented Dominica in the Windward Islands Under-15 Cricket Tournament, and then got selected to the West Indies Under-15 Team.

Observations: The community of Pichelin has been contributing to the development of basketball at both community and national levels for over two decades now.

Pacers won a championship in the late 1990s, and Falcons Division I the Regular League and National Championships in 2012 and 2013 respectively.

In 2016, Pichelin's Premier Division Falcons team - "the new kid on the court" - made their presence felt on the national basketball scene, capturing the Regular League Championship and the Runner-up position in the National Play-Offs by only their third season!

Their basketball academy, Off-Season League, basketball facility, and good leadership and sponsorship are all attributes of which all villagers of Pichelin must be justifiably proud.