'Bigging Up' the Table Officials

Jump Ball No. 50. By Arlington James 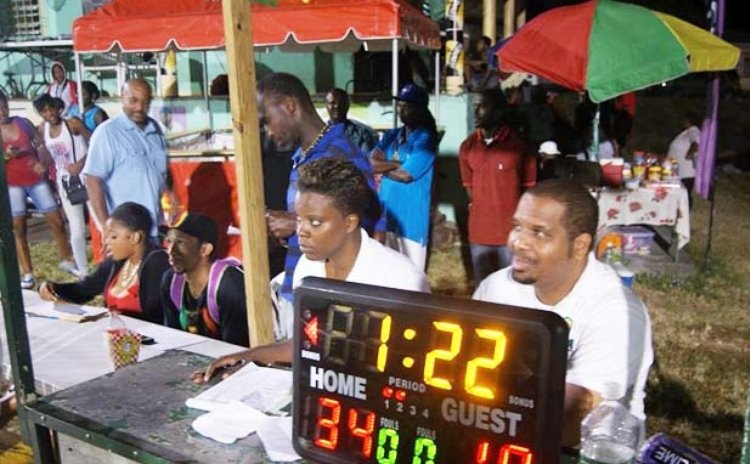 A basketball match is a contest that involves teams two of which are the opponents, viz. Team A and Team B.

The other teams work with each other and are neutral. These are the officials who comprise two sub-groups: the on-court officials or referees and the Table Officials.

Let us take a take a seat with the table officials at their table.

Table Officials are required to arrive at the match venue before the two competing teams. Prior to the start of the encounter the scorer must accurately record in the official score-book, for each team, the name and jersey number of each player; the names of the Coach and Assistant Coach; date and scheduled starting time of the match; the particular competition (e.g. League, Knock-Out semi-finals, Play-Off Finals), etc, etc.

It is very important that after the team lists are entered into the score-book that the lists be scrutinized and approved by the respective team Coaches because once a match has commenced changes cannot be made to those lists.

During the course of a game the table officials must communicate with the referees and be able to interpret the latter's hand signals. Further, the scorer and timer MUST communicate with each other, and in some cases the timer serves as an extra pair of eyes for the scorer who may be in the process of recording a score when a quick steal occurs under the backboard on an inbound pass, and a basket scored.

There was a time when table officials had to occasionally sit through three consecutive league matches in one night, sometimes well past midnight. However, table officiating team members must remain focused and cannot afford to allow themselves to be distracted, neither among themselves nor by 'outsiders' who stake out close to the scorers' booth or elsewhere.

Both have very important roles to play. The scorer keeps the teams' running scores as well as individual player baskets; records player fouls (by category, e.g. technical, disqualifying etc,), bench fouls and team fouls; time-outs; notifies referees of foul-outs and requested substitutions; informs referees of bonus situations; and so on.

Immediately following the final whistle, the scorer must inscribe the name of the winning team; tally the individual player scores so that those twelve or fewer scores add up to the team's final score; and provide the book for signing by the referees, and by a team captain should that team plan to protest the outcome of the game.

The timer keeps time in the match, and has to be very sharp on the clock, as a team can win or lose a game in less than 1 second.

Table officiating in Dominica has come a long way. Some of us may remember the days of the big bell which was vigorously rung by the time-keeper to signal Time-Outs, the end of the playing periods (halves, and Over-Time period[s] if a match goes into extra time), substitutions, foul-outs, getting the referees' attention, etc.

In those days there were no 30-second shot clocks and the game clock was a normal start/stop clock that sat on the scoring table, facing the scorer. The score board was fashioned out of a piece of ply wood on which were hung hand-painted name plates for the competing teams and hand-painted metal or plywood mini-plates bearing individual digits from 0-9 to compose the running scores.

However, in 1984 scoring and timing at official basketball games played at the Windsor Park became 'updated' when the Small Projects Assistance Team (SPAT) made a donation of a relatively large electronic scoreboard to the Dominica Amateur Basketball Association.

That scoreboard was mounted on cut utility poles, with its own roof, high above patrons' heads in the crowd so that most persons attending games would see the running score and count-down timing of the match.

The receipt of that scoreboard was a major shot in the arm for basketball in Dominica and that piece of equipment was used for local and regional basketball competitions at the Windsor Park until the facilities were demolished in 2000 to make way for the Sports Stadium.

Today, in addition to using electronic scoreboards and 30-second shot clocks, we see laptop computers used by match statisticians, even in School League games, complementing the efforts of the man or woman 'on the score book'.

Jump Ball says "BIG UP" to ALL Table Officials. Keep striving for excellence.