Supporters of the ruling DLP in Pichlen, in the Petite Savanne constituency, protest the removal of candidate Marva Williams 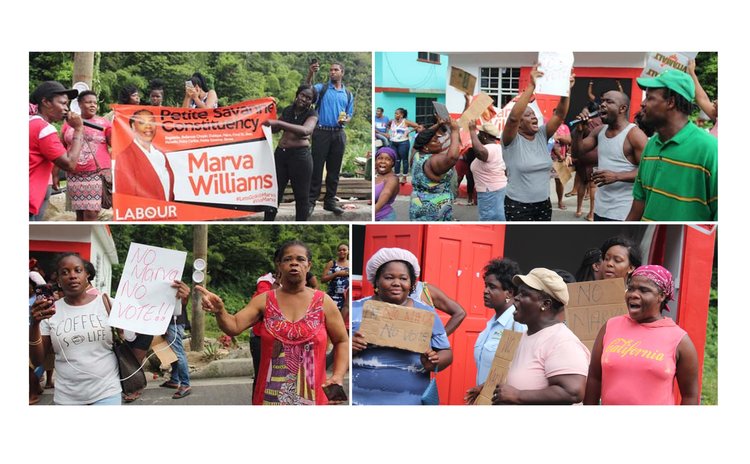 They shouted their anger over and over again; they carried hastily-made placards; they occupied the quiet streets of Pichlen demanding the reinstatement of Marva Williams, the recently announced candidate for Petite Savanne of the ruling Dominica Labour Party (DLP). Their anger captured the attention of the nation last week Monday, June 17.

The protesting people of Pichlen were displaying their dissatisfaction with the sudden removal, by party leader Prime Minister Roosevelt Skerrit, of election candidate for Petite Savanne Marva Williams, just four months after Skerrit named Williams as part of a major overhaul of the DLP for the 2019 campaign.

The people of Pichlen said the decision was "disrespectful" and demanded her reinstatement.

One of Williams's sister said the former candidate had a lot of support in Petite Savanne but DLP insiders told the Sun that a CADRES poll indicated that Williams would have lost the seat.

"That is the first time someone from Pichlen is going up for elections. Pichlen is the place that always making Labour win. They disrespected her," she said.

"The decision had been made now for a few weeks…the people of Pichlen do not want Darroux. Marva has been there for a few months and has done well. The Prime Minister is disrespectful," another protester said.

"We are giving him the same bullet that was given to Ambrose George in 2014 in Roseau South. You are saying that you are in charge, but you must respect people. This is total nonsense. Skerrit, we run things in Pichlen. No Marva, no vote," another protester said.

It is still unclear who will replace Williams; the names of Dr. Kenneth Darroux, the current parliamentary representative and Minister of Health, and Pamela Guiste are making the rounds. Dr. Darroux hung up his political boots by deciding he was not contesting the upcoming elections but he has apparently un-retired himself.

According to a source, Vince Henderson, the DLP campaign manager, and other top leaders of the DLP met with Dr. Darroux and asked him to consent to be the DLP candidate for Petite Savanne.

"All I know is that they met with Dr. Darroux; he has also discussed the situation with his parents and he is expected to make a decision…I am not happy because I would want him to stay out but I will just have to wait and see what happens," a source close to Dr. Darroux said.

In a message sent to a friend, Williams said the decision to remove her was "hurtful and disrespectful."

She asked: "How can you treat me so"?

When contacted for comments on the situation Williams said: "I have no comments…go in peace and may God bless you all."