Putting the last first: Transforming Dominica by focusing on the rural poor 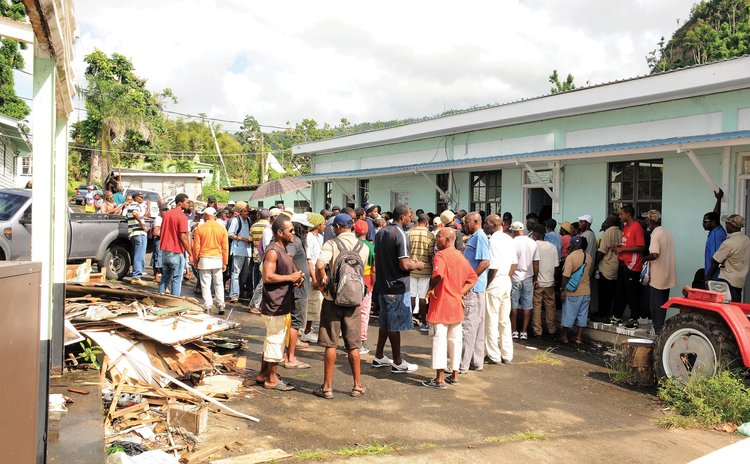 Government's agricultural department is busy planning again, like it has been planning for the past five decades but not much happened to production and productivity in that sector.

Last week we learnt that Diane Francis, the former Miss Dominica, was helping the Ministry of Agriculture, Food and Fisheries revise its strategic plans and its work programme for 2019 to 2020.

Ms. Francis was assisting the technicians here as a senior officer of the Inter-American Institute for Cooperation on Agriculture (IICA) of Trinidad and Tobago. She said at the opening function of that two-day exercise that to succeed agriculture and rural development have to be placed again at the front burner of the development process in Dominica. In other words, the traditional last has to become first.

We wish the Ministry of Agriculture and Diane Francis well but forgive our scepticism- there are dozens of plans lying on the shelves or in cardboard boxes at the Ministry that Ms. Francis could have decided to just dust off, type in a new date and go visiting her friends and family. But Francis is the consummate professional who would go through the motion again and again no matter how futile.

Francis knows, of course, that the problem with Dominica's agriculture is that politicians say the sector is first but based on the resources that they inevitably allocate, the sector is really last on their agenda.

For example, nearly two years after Hurricane Maria, the roads at Carholm, one of the island's most productive areas are impassable and subsequently many farmers have abandoned their farms there.

Here's another stark example: officials of the Division of Agriculture have been located in cage-like offices at the Botanic Gardens for 40 years; these "cages" were constructed after the devastation of hurricane David in August 1979. Yes, four decades ago.

In his 1983 book "Rural Development: Putting the Last First" Dr. Robert Chambers states that it is sound policy to put the last first because thousands of largely unseen people in rural areas are poor, weak, isolated, vulnerable and powerless. They continue to be ignored.

"Whatever one's ideology it seems right to reverse the forces which exploit the people and keep them physically and socially wretched," he wrote.

You may have heard the argument in recent times that politicians keep people poor, and farmers unproductive, so that the rural poor can remain dependent and beg for "cool-outs", the new local term for political hand-outs. But that's another story.

It seems obvious that agriculture and farming have remained underdeveloped for so many years that it makes sense that as the Government of Dominica is preparing to deliver its annual budget for the coming fiscal year that agriculture will at last receive some more attention than it has in the past. But don't hold your breath.

On the issue of making agriculture great again, to paraphrase President Donald Trump's 2016 campaign slogan, farming has to be positioned as serious business, the life-blood of rural communities.

To make that sector grow again we need to reassess our food import bill. This is important because the island's current actions and policies are driving the population towards the consumption of imported foodstuffs rather than utilising locally grown produce.

Almost everyone in the region will agree with the view that the issue of food production and consumption is extremely important. The fact that CARICOM spends more than US$3.5 billion in extra regional food imports should propel us towards taking immediate steps to alter the situation. It is also conspicuously obvious that we cannot keep siphoning our wealth to foreign farmers while our country continues to be burdened with high rates of joblessness and a deepening social and economic crisis in rural areas.
So there are valid reasons why government needs to put additional focus on agriculture in the post-Maria period. But we can assure you that words alone will not solve the problems. To set agriculture on the road to recovery there has to be a sustained effort from all stakeholders; government, in particular, has to take extraordinary measures to promote and protect domestic production.

One thing is absolutely clear: the transformation of agriculture cannot be achieved if we do not confront some of the never-ending problems that have been affecting the sector for many decades. One of these is the large number of aged subsistence farmers who, with forks and hoes, toil over one-acre plots on hilly terrain. The point we need to stress is that the image of agriculture has to be transformed from one dominated by mostly old and semi-literate people to modern enterprises, using suitable and modern technology and controlled by young and sophisticated entrepreneurs and employees.

But Dominica has long way to go before it arrives at that critical juncture when agriculture is productive again. But if the country just pays lip-service to food production and distribution then levels of poverty, malnutrition as well as non-communicable diseases will increase.

We, therefore, suggest that Dominican planners make a greater effort at rethinking their approach to agriculture and rural development by putting the last first. Cool-outs are not enough.