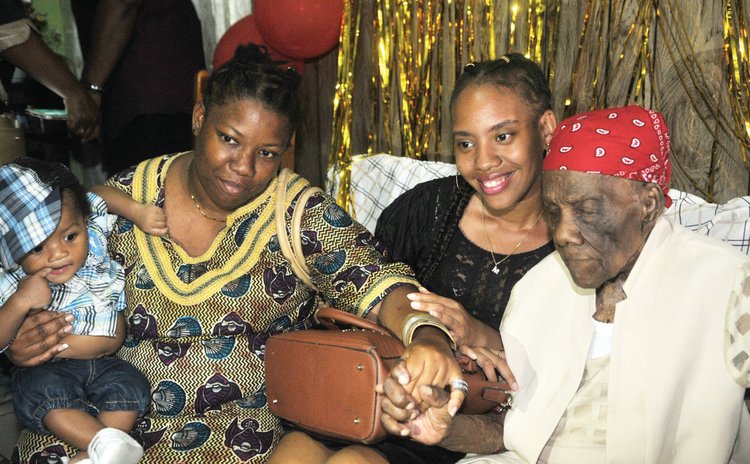 Centenarian Ma Jazz in the company of relatives and friends

Last week relatives, neighbours, friends and President Charles Savarin and Mrs. Savarin met under a tent in the shade of the Samman trees near her home at Bath Estate to celebrate a unique milestone because so few people live to 100. Or even close to 100.

Born on 22 July 1919, Ma Jazz lived through the 1939 Great Depression; she was born one year after World War I ended and was a 26 year- old- young woman when World War II ended in 1945. Ma Jazz reached that extremely ripe old age not only because of her genes but because she lived the natural life.

"I guess she lived so long because of what she ate. She had no problems with nobody and she didn't stress-out herself," said her daughter Mary "May-May" Largeuer. "Mama don't like problems; whenever she sees a problem, she leaves it alone."

Her diet included codfish, fish, vio, tonton, farine-and-avocado, cocoa tea and Crapaud soup. The centenarian lived the simple life of a vendor at the Roseau market.

"She would walk from Roseau to Morne Daniel to get mangoes," said Mary.

The late Thomas Baptiste was one of her siblings.