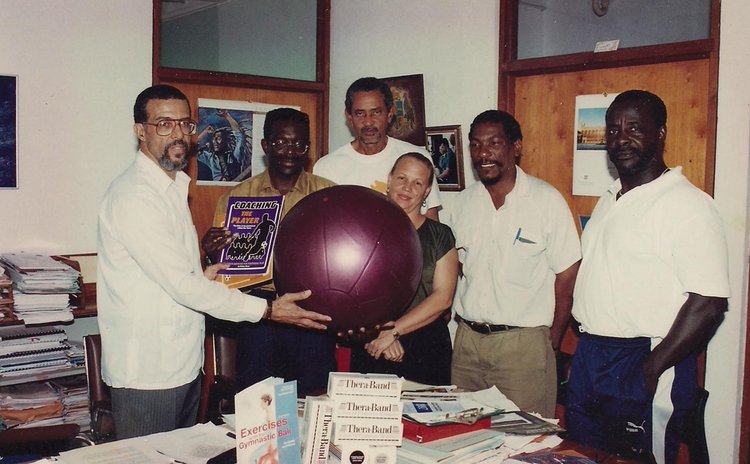 Part III of the article presented on the performance of La Plaine's teams in recent editions of the national league (continuation); La Plaine's team in KDBL 2018; La Plaine in REBOC; and the La Plaine/South East Basketball Leagues. The article continues below:-

3-ON-3s & Friendlies: '3-3' is a popular half-court basketball game in Dominica and this has been formalized as 3-on-3 Competitions.

Around 2004 or 2005, La Plaine staged a 3-on-3 mini-tournament, much to the delight of the basketball players and enthusiasts from the village. Since then, as many as 10 teams participated in particular editions of the 3-on-3, but that number gradually declined and by 2015 participation had shrunk to only 3 teams.

Interestingly, one Sunday afternoon some years ago, a La Plaine team engaged a team from Grand Fond, in Grand Fond, in a 3-on-3 Grudge Match. At stake was a case of beer!

Basketball Friendlies are always welcome entertainment and La Plaine teams have engaged teams from outside of the district in such matches, both 'at home' and away. So far they have played against teams in Wesley and Paix Bouche and frequently against Police Sports Club. They have also engaged Canefield Tigers, X-Men from Roseau, and hosted an All-Star team put together by Dunstan 'Maggie' Peters.

La Plaine Teams In Other 'Off-Season' Leagues: Over the years, teams from La Plaine have participated in other community basketball leagues staged by organizing committees in other basketball centres.

Another team from La Plaine, Rattlers, had also represented the village in the 1990s.

La Plaine's School in Competitive Basketball: Only a single school exists in La Plaine, i.e. the Jones Beaupierre Primary School (JBPS) and during the last few years JBPS has been participating in the Primary Schools Basketball Festival which falls under the auspices of the Sports Division.

The JBPS has participated regularly in the Festival for several years, including as recently as the 2019 edition. And although the team has reached the finals on some occasions, there is much hope that the championship trophy will come home to La Plaine one day.

Meanwhile, Kwame Eusebe, who had moved from Petite Savanne to La Plaine during his early teens, was selected to the Dominica Senior Men's National Team in 2011. Also, as noted earlier, Richie (from La Plaine) played on the national team while a member of Pros from Grand Bay.

La Plaine Basketballers Who Excelled In Other Fields: Among the scores of players who have sported La Plaine's basketball uniforms, several have excelled in other fields such as sports, politics, professionally, etc.

Raymond Austrie – Raymond became an Agriculture Officer, later headed the Dominica Banana Marketing Corporation, then served as Permanent Secretary (Ag.) in the Ministry of Agriculture. He is currently one of the leading producers of fresh ripe bananas in the country.

Earsan Fontaine – Earsan was a star striker for South-East Football Club and the Dominica National Team for several years.

Ronald Green – Ron served as President of the Dominica Amateur Basketball Association for three terms, 1976-1982; a regular member and later Chairman of the La Plaine Village Council; Parliamentary Representative for the La Plaine Constituency from 1995-2009; and Minister for Education, Youth & Sports from 1995-2000.

Henry 'Hendo' Hilaire – Hendo, the owner of Bionic Leather Craft, has become one of the leading leathercraft producers in Roseau, specializing in leather sandals, belts and other such items for over 30 years.

Dr. Phillip 'Murray' St. Jean – Dr. St. Jean (deceased since March 2018), a former Junior Calypso Monarch and an avid La Plaine Bann Mové reveler, was serving as the District Medical Officer for the Roseau Health District at the time of his passing. He was instrumental in implementing the Miracle Eye Mission, a program sponsored by the Governments of Venezuela and Dominica, which provides eye-care for the less fortunate in Dominica.