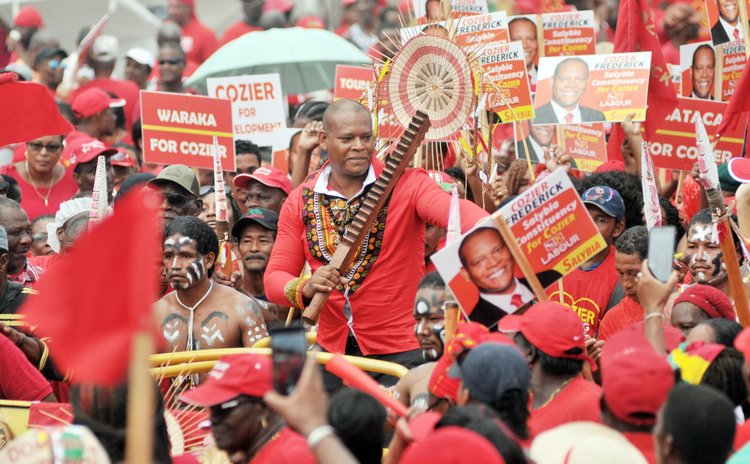 DLP candidate for Salybia arrives at his launching

If promises are horses there will be hundreds of stables filled to capacity all over the Kalinago Territory following the Dominica Labour Party (DLP) red- red-red massive rally there on Sunday to launch Cozier Frederick as the DLP candidate.

But the Kalinago, Dominica's indigenous people, are probably used to promises made over decades.

Nevertheless that did not deter Prime Minister Roosevelt Skerrit as he made promise after promise, commitment after commitment, when he delivered the feature address at the rally.

"We have been good to the people of Salybia," Mr. Skerrit said. "This 20-year marriage is not about to be broken. There are no irreconcilable differences between us and the Salybia constituency".

Before Skerrit spoke, candidate Cozier Frederick, surrounded by Kalinago braves dressed in native costumes, outlined the needs and aspirations of his people.

"Agriculture has been the bedrock of the Salybia Constituency for many decades," Frederick said. "They (the farmers) have worked hard but the quality of their lives does not reflect that".

Frederick, a graduate of The University of the West Indies, said he "will not rest until a monument for our Kalinago ancestors, who fought and died for Waitukubuli, is erecting".

During his travels around the island he said he observed that most of the upper and middle classes are occupied by civil servants.

"I am saddened by the fact that this does not happen in the Salybia constituency," he said.

The people of the Salybia constituency have been voting overwhelmingly for the DLP; the party has won five of the last six elections there since 1990 and Prime Minister Skerrit is hoping that the Kalinago people's voting preferences remain unchanged.

By equating the DLP with the Government of Dominica, Skerrit misleadingly argued that the Kalinago people "did not see" politicians of the opposition United Workers Party after Hurricane Maria but the DLP.

Skerrit also played the race card by telling the Kalinago people that since he is from Vielle Case he may have Kalinago blood flowing through his veins and Kalinago voters should consider that when they are selecting a political leader.

"I am the only political leader who has the back of the Kalinago people," he said. "It is Labour that has taken the Kalinago territory seriously."

"I have the pink shoes; it is a very glossy," Skerrit said.

Next week the DLP campaign train moves to Grand Bay, a major bastion of DLP support.