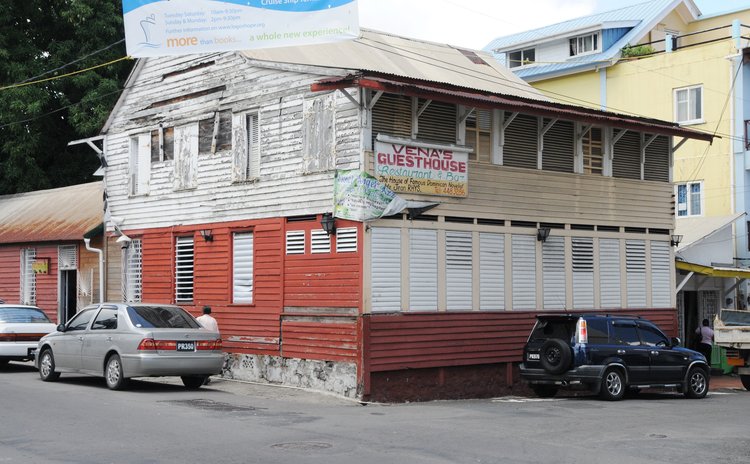 The House where famous writer Jean Rhys lived as a teenager

"The childhood home of writer Jean Rhys in the centre of Roseau, Dominica has been demolished."

That's the first sentence in a report by Polly Pattullo published in "Repeating Islands", a website dissemination news and commentary of Caribbean culture, literature and the arts.

After the article was published, the people reacted.

The following is a sample of the 44 responses (un-edited) to the article.

That's a dam shame for a country who speaks of ecotourism and culture. We accept too much shit in our beloved country, only time will tell. The stealers of our money, who turn around buy and destroy our heritage and turn the town to a concrete jungle, only a moment longer. This too must come to an end.

For so many years the building stood there in ruins why didn't you all raise funds to do all the great things you are talking about now. You just sit there and complain. Covid19 is here, what you are all doing to help anyone. After hurricane Maria what did you all do to help anyone?

It's not Skerrit to blame, we must all hold the corrupt people of D/ca responsible cause they were always corrupt. They only needed a negative leader and they got two of them in the person of Roosevelt Skerrit and Charles Savarin, Dominicans too mischievous and shameless to have these two shameless (San hunt) guys at the helm.

I am very disappointed to hear of this. A stronger appreciation of heritage – of the broad spectrum of culture is required; historical, artistic, environmental and all aspects of sustainability such as gold standard grade listing. This building could have been preserved and saved for the nation and secure interest for visitors in perpetuity – and of course for our own people. This was a pan-Caribbean treasure. Another office block will not add interest and architectural charm to Roseau, especially on a corner plot. Will a plaque be placed on the proposed building?

This building should not have been destroyed. Like the Cabrits buildings it should have been enhanced and retained as a historic site.

A country that does not preserve its History is like a Tree without Roots! We need to stop the bleeding in Dominica.

I feel emotional and sad reading of the demolition of this beautiful heritage of Dominica. Though I reside in the United Kingdom, that building is always there when I visit. Also I am the proud owner of one of Jean Ryes books. That building would be preserved and not a stone moved if it was in the UK.

Amongst other things, Jean was a novelist, short story writer and essayist who was born in Dominica. Let's complain about the black history that we've lost in Dominica rather than the demolition of an abandoned family plantation house of a woman who did not live in Dominica.

Thanks for this very sensible comment. Too many of us allow our emotions to control our thinking. Her contribution to Dominica was zero.

Anywhere else in the world Jean Rhys' childhood home would be a tourist attraction. As disgraceful as colonial rule was money could be made by conducting guided tours of the colonial architecture in Roseau/Dominica.

The destruction of one important element of Dominica's literary history sadly smacks the face of the need for preservation of our heritage. Hopefully whatever structure on the site will recognise or even capitalise on its famous resident. What an opportunity to blend the old with the new! The situation is calling out for effective conservation measures.

As a fellow ex-pat West Indian born in Grenada of Polish parents with photos of my very early childhood year in Dominica, I'm disappointed in this and the other poor receptions towards a piece of Dominica history. The mere fact that this historic contribution was made, that you read it, that we all read it, that so many visitors have come to see the house where she was born, that Dominica can lay claim to having been the birthplace of a famous author…should I go on? The name Jean Rhys will live on for the ages to come, and along with her so does Dominica. Be proud of Jean Rhys as part of Dominica's history regardless of what or whose perspective – history cannot be changed.