Jump Ball No. 77(Part I). By Arlington James 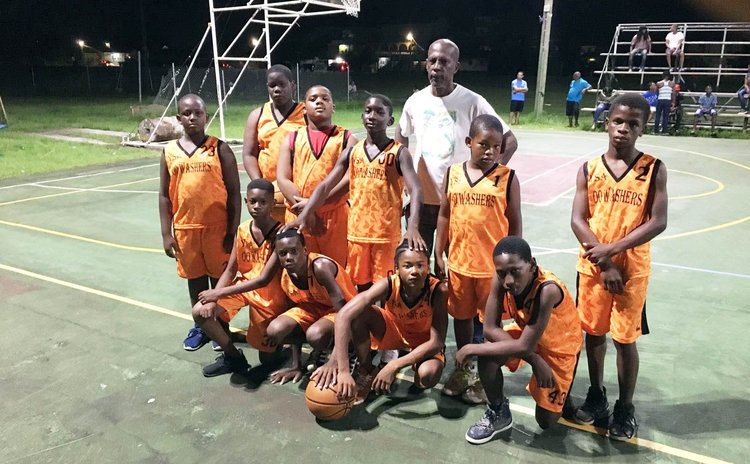 A member of the Douglas family in Portsmouth, he was christened Adenauer but is more popularly known by his nickname which he spells "Warshwoa", but this is pronounced "Wash-way". Many people, even in the local print and electronic media, believe that Warshwoa or Wash-way is his Christian name.

His deceased brother Rosie played pick-up basketball, but Adenauer can be considered Portsmouth's Mr. Basketball himself!

The Early Years: Wash-way first got introduced to the sport of basketball while attending St. Mary's Academy (SMA) in the mid-1960s, shortly after the national league bounced off in 1966. There he saw the first four pioneer teams (Argonauts, Citylites, Limers and SMA), as well as pioneer players such as McFord Zamore, Augustus St. Hilaire, Bernard Thomas and many others competing with or against each other.

Douglas only played pick-up basketball at SMA, but never participated in the House Basketball Leagues or played on the school's basketball team.

After transferring to the Dominica Grammar School Wash-way continued to shy away from playing competitive basketball, and despite the best efforts of Coach Ossie Savarin to recruit him he quietly declined and instead channeled his energies into Track & Field, competing in 400m and 800m races.

While attending the University of Hartford in Connecticut in the 1980s he played pickup games, but unfortunately, he did not get the opportunity to represent his university.

He led the PBA in hosting a very successful inaugural "PBA League" in 1991 which saw nine teams (5 from Portsmouth, 2 from Marigot, and one each from Wesley and Paix Bouche) vying for championship honours in the ball-o-rama, league and knockout competitions.

Wash-way was also the co-founder of OO Washers, one of the Portsmouth teams which competed in the inaugural PBA League. "OO" is Augustus Hamilton's nickname, while "Washers" was modified from Adenauer's nickname.

It should be noted that in 1993, on behalf of the PBA, Douglas successfully negotiated a $5,000 donation to the PBA by the local agents of Baker's Pride Flour. Two of the teams in the Junior PBA League were Baker's Pride and Baker's Choice.

Wash-way also served on the Executive of the DABA. He was first a Committee member for several years, and then served as the Association's Vice-President for two consecutive terms.

He also served for 4 years on the Dominica Olympic Committee and was Dominica's Chef de Mission at the 1999 PanAm Games in Winnipeg, Canada.

Coach Wash-Way: A fairly substantial amount of Wash-way's basketball energies has gone into coaching, from school team level up to the senior national team level and some of the players whom he coached several years ago, including Brian Zamore, still respectfully address him as "Coach".

He wore his most distinguished coaching cap when, together with Marcellus Lee, he served as Assistant Coach of the Dominica Senior National Basketball Team for the 1998 Windward Islands Basketball Championship.

In 2017 he coached a Dominica Women's Team for an invitational match against a top women's club in Martinique.

His other stints with the clipboard include coaching of: -

• The Dominica Under-19 and Under-20 basketball teams.

• The Raiders team from Portsmouth, in the senior division of the national (DABA) basketball league in the 1990s.

• A "Zone A" All-Star team in the 1997 DABA League for a tournament in Portsmouth.

• The OO Washers in several editions of the PBA League.

• The PSS Senior Boys team in the Portsmouth Basketball League.

• The Junior Washers of the OO Washers Basketball Academy for the 1st Euro-Caribbean Teenage Basketball Tournament in Martinique in 1999. One of the Dominican players, Cameron Robinson received the Best Defensive Player Award in that tournament, in which teams from six countries / territories participated. The team returned to Martinique in 2017 for another edition of the Tournament which involved six teams then.