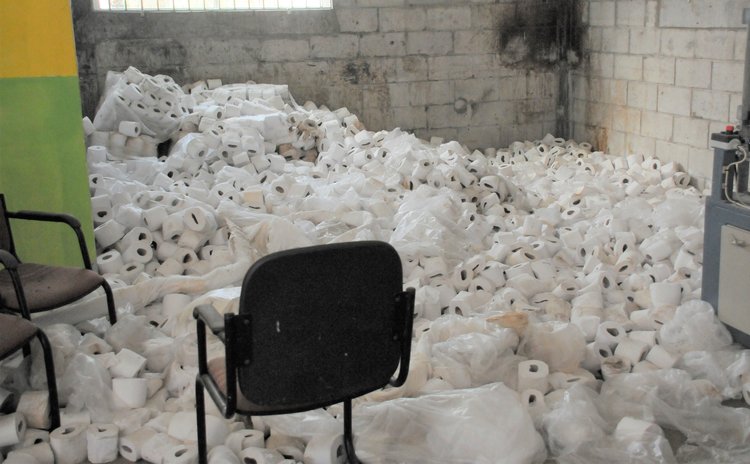 A large heap of toilet paper goes to waste

With the death of Dominica's only paper factory and the recent cancellation of carnival, Dominican businesses continued their journey down the economic precipice in 2020. Blame politics and COVID-19.

Let's take the last one first.

It's no secret that the cancellation of the annual festival by the Government of Dominica earlier this month will hurt the public purse, although the actual economic impact of carnival remains unclear.

Carnival brought in hundreds of visitors to the island for the event – the majority of whom come from the Diaspora. This means that everyone from the food vendor to the taxi operator, accommodation provider and supermarket owner, cannot now earn some much-needed cash during the season.

Virtually all the foreign currency that would have come with these visitors must now be written off, said McCarty "Mark" Marie, an economist and small hotelier.

"We will have less people coming into the island so the spending power will surely be decreased and the bars, supermarkets and the locals will suffer," Marie told The Sun.

The potential blow to the economy notwithstanding, everyone agrees that health and safety come first in the delicate balance between lives and livelihood. FDIC's Curtis Tonge: "Bear with us"

One of the business that struggled to survive in 2020 was Dominica's locally- grown insurance company. Almost three years after Hurricane Maria, a number of people insured with First Domestic Insurance Co Ltd (FDIC) were yet to be paid claims, the Sun reported in August. At least one person filed a lawsuit against the company seeking thousands of dollars in claims.

FDIC found itself in hot water with its clients because it was unable to meet its commitment and obligations.

Curtis Tonge, the Chief Executive Officer of FDIC confirmed that he received court documents filed from one of his clients but Tonge declined an invitation to speak further on the matter.

After Hurricane Maria, the Government of Dominica provided FDIC with a loan of EC$ 5 million to assist the company in paying out claims to policy holders affected by Hurricane Maria but that amount was woefully inadequate.

But there were a few bright clouds

In 2020, DOMLEC, NCCU and the National Bank of Dominica (NBD) reported profits during the previous year of operations.

"NBD reported a profit before provisioning and taxation of $33.3 million and net profit of $13.1 million," Anthony John, the chairman of the board of directors said in the 2019 annual report. How did the NBD achieve such significant growth in 2019?

Ellingworth Edwards, the managing director suggested that the NBD strategy of expanding non- interest revenue had been working.

Meanwhile, the National Cooperative Credit Union (NCCU), the island's largest credit union entity, reported that it had an asset base of EC $640.9 million and a membership of 48,958.

On Sunday 11 November, amid the raging COVID-19 pandemic, the NCCU held its annual general meeting to report the good news to its members.

"It was a year marked by impressive financial results, increased competition in the market for loans and volatility in the rates of interest on investment instruments," president Josephine Dublin wrote in the 2019 annual report.

In addition, DOMLEC sparkled in 2019 with $1.66 million profit after taking a battering more than two years ago from category 5 Hurricane Maria.

"It is heartening to report that profit after tax was EC$1.66 million in 2019 compared to a net loss after tax of EC$2.5 million in 2018," wrote Chairman David McGregor in the company's just-released 2019 annual report.

Severin McKenzie, the proprietor of Nature Island Paper Products Incorporated said in September that "the politics of abuse, victimization, and discrimination" had destroyed his business.

As thousands of rolls of white toilet paper was scattered around the factory floor at Shed #5 at the AID Bank industrial site at Canefield, McKenzie said that NIPPInc was one of the most promising manufacturing entities to emerge in Dominica in a decade.

"There is no doubt that the experience of Nature Island Paper Products Inc. is one of a local type of apartheid, where a company is destroyed or brought on its knees unless it subjects itself to the dictates of the politicians in power," said Severin McKenzie, the proprietor and developer of NIPPInc.