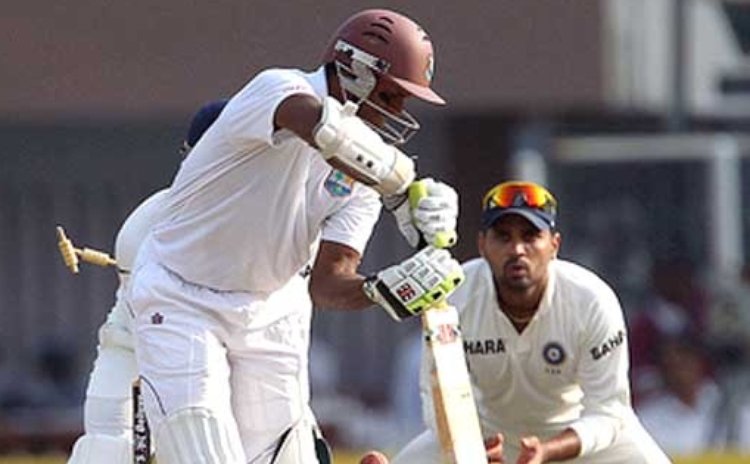 KOLKATA, India – A day that started with much promise ended sombrely for West Indies, after a half-century from Marlon Samuels failed to ignite their batting, as newcomer Mohammad Shami triggered a collapse to give India an early advantage in the first Test on Wednesday here.

Samuels hit the top score of 65, but Shami grabbed 4-71 from 17 overs on debut, as the Windies, choosing to bat, were bowled out for 234 in their first innings about an hour after tea on the opening day before a packed Eden Gardens.

Several of the West Indies' batsmen got starts, but failed to carry on – Shivnarine Chanderpaul scored 36, Kieran Powell made 28 and Darren Bravo got 23 – as the visitors crumbled after tea from a steady 138 for two.

The Windies, whose bowling plans were compromised with Kemar Roach sidelined with a sore shoulder, then failed to remove either left-hander Shikhar Dhawan, not out on 21, or fellow opener Murali Vijay, not out on 16, as the Indians reached 37 without loss when stumps were drawn.

West Indies captain Darren Sammy said the previous day his side needed to avoid the calamitous sessions that have often eroded their positions of strength in past Tests.

But five wickets – including Sammy's – in the period between lunch and tea was proof that it remains an area of concern for the Caribbean side.

The stylish Samuels was in cruise mode, reaching his 50 from 61 balls, when he guided left-arm spinner Pragyan Ojha through square cover for a single in the second over after lunch.

Samuels was fortunate on 60, when wicketkeeper Mahendra Singh Dhoni, the Indian captain, put him down from an under-edged cut off Ojha.

But umpires Richard Kettleborough and Nigel Llong, both from England, decided they were not happy with the condition of the ball and issued India with a replacement, which Shami used to good effect, getting it to reverse swing prodigiously to the detriment of the West Indies batsmen.

Samuels was bowled playing back to a well-pitched delivery from the fast-medium bowler that kept low and moved back to extract his middle stump. The Windies batting stylist struck 11 fours and two sixes from 98 balls in 103 minutes, and put on 91for the third wicket with Bravo that had revived the Windies from a wobbly 47 for two after the first hour.

West Indies suffered a further setback, when Bravo was run out for 23 in a mix-up with fellow left-hander Shivnarine Chanderpaul next over.

Bravo advanced looking for a single into square leg from off-spin threat Ravichandran Ashwin, failed to get a clear response from Chanderpaul and was beaten by Shami's throw to Dhoni.

Denesh Ramdin was fortunate next delivery, when he edged his first ball, from Ashwin, just wide of slip for a boundary, but Shami bowled him for four in the following over, when he played too late on a delivery which moved back sharply and also extracted his middle-stump.

Sammy came to the crease and endured a few tense moments with Chanderpaul against Shami to stem the fall of wickets. He managed 16 before he tried to collect his fourth four, off Ojha, and was caught inside the long-off boundary to leave the Windies 172 for six.

To a tumultuous roar from the crowd, Shane Shillingford's 40-minute resistance came to a momentous conclusion, when he was adjudged lbw for five playing defensively forward to Indian batting superstar Sachin Tendulkar to prompt tea with West Indies 192 for seven.

After the break, Chanderpaul batted with typical aplomb before Ashwin bowled him, when he played down the wrong line, and there was token resistance from the bowlers.

Earlier, Bravo and Samuels batted with typical flair before lunch in front a crowd that half-filled the vast stadium to be part of Tendulkar's pentultimate Test. They helped the Caribbean side overcome the setback of losing their openers in the first hour.

Samuels got off the mark when he glanced his first delivery from Shami to the deep fine leg boundary for four and unleashed a volley of typically stylish strokes.

He greeted Ojha with a six over long-on and a searing drive through cover off Bhuvneshwar Kumar just before the interval gave goose-bumps.

Bravo was far more sedate, but no less at ease and lofted Ashwin for a six deep into the crowd over long-off with his one stroke of violence before lunch.

Gayle had guided the first ball of the match from Kumar between third slip and gully for a boundary, but eased the nerves when he collected three fours from Shami's third over from languid, rather than brutal strokes.

The big left-hander had a determined approach to his batting and moved serenely to 18 before Kumar squared him up and he was caught at second slip from a thick edge.

Powell typically never looked troubled at the crease, confidently handling the new-ball pair of Kumar and Shami, and welcoming Ashwin into the attack with a lofted straight six off his third ball and a lofted on-drive from the final ball of the bowler's first over.

But the lean left-hander was undone by the uneven bounce of the pitch, when he miscued a pull at a short delivery from Shami and was caught at mid-on for 28 to prompt the day's first drinks break with the visitors 47 for two.

With Roach nursing his sore shoulder, left-arm fast bowler Sheldon Cottrell made his Test debut, becoming the 297th Test player from the Caribbean.

It meant there was only one change to the side that played in the tour opener against Uttar Pradesh last week, with off-spinner Shillingford replacing left-handed batsman and part-time off-spinner Narsingh Deonarine.

Local authorities held a brief ceremony before the start of play, presenting both teams – including the soon-to-be retired Tendulkar – with bouquets, a commemorative medal and tie.

The second and final Test starts next Thursday at the Wankhede Stadium in Tendulkar's home city of Mumbai and will be followed by three One-day Internationals.